Budget ‘papers over cracks’, instead of building health service 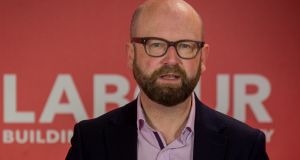 In his Dáil response to Budget 2021, Labour Party finance spokesman Ged Nash said there was a long way to go on the ‘two-tier health system’ but there was also a two -tier economy. File photograph: Gareth Chaney/Collins

The budget is “papering over the cracks” again rather than beginning the work of building an Irish national health service that everyone would be proud of, Labour finance spokesman Ged Nash said.

He also described Fianna Fail and Fine Gael in government together as a marriage, and said in the budget “the marriage was consummated - but the wedding speeches didn’t live up to expectations”.

In his Dáil response to Budget 2021 Mr Nash said there was a long way to go on the “two-tier health system” but there was also a two -tier economy.

There are two Irelands in existence, one with “billions of euro extra in supports for businesses but cuts for workers on the PUP and no shame about it either”.

The Louth TD said “we were told there would be no cuts, but austerity is back for those who can least afford to carry it”.

He added, however, that “it would be churlish not to recognise that there is much in this package to welcome” including extra resources targeted at health, housing, education and wage supports.

“The question is, will it be enough to stave off the twin threats of Covid-19 and a no trade deal Brexit?”

He said cutting the VAT rate to 9 per cent for the hospitality and tourism sector might be politically popular but the initiative “will not do what you seem to think it will” because “the money is there. It’s just that the conditions to spend it aren’t.”

Mr Nash also called an end to the terms “Christmas Bonus” for the double social protection payment made at Christmas.

“It is patronising and suggests that someone who depends on the State for their income should be grateful for an extra week’s payment at a challenging time of the year.”

Reacting to Budget 2021, she said it represents a “lost opportunity” to make the choices that would lead to long term social and economic revival.

The Government could have used favourable borrowing levels to “ensure investment in vital public services”.

And she said there was very little in the budget for workers with no proposals for low-wage workers “and little hope that many of our key workers, who have proved so invaluable, will see their lot improve”.

She added that “there is nothing in this Budget that will reduce the cost of living for people”.

Social Democrats housing spokesman Cian O’Callaghan said the budget failed to deliver affordable housing because it “lacks the ambition that is required”.

He said the Government should use the historically low interest rates by borrowing to directly build thousands of affordable homes.

But he said it included funding for just 400 cost rental homes and “provides more subsidies for developers and extends tax breaks for big funds”.

People Before Profit TD Richard Boyd Barrett said the headline figures sounded great but the detail of the budget “it doesn’t actually do what’s absolutely necessary”.

He said it was “a very dangerous mistake” that the pandemic unemployment payment and the employment wage subsidy scheme had been cut.

Infection rates are rising and “hundreds of thousands of people” could again lose their jobs if further restrictions were imposed but was a “very serious undermining of the collective social solidarity that we need to deal with the threat of Covid-19”.