All 35,000 tickets for this year’s event have been sold out 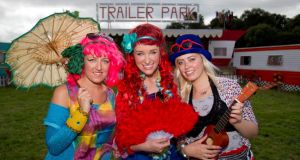 All 35,000 tickets for the weekend have been sold out, and it looks like festival-goers will be lucky with the weather. Photograph: Liam McBurney/PA Wire

Campsites at the Electric Picnic venue in Stradbally, Co Laois, will be open from 9am today, with surrounding roads expected to be busy. Gardaí have suggested that festival-goers set off early and have advised other motorists to take account of the much busier roads.

This year marks the 10th Electric Picnic, a milestone that will be celebrated at the event this evening. Everyone at the music festival this weekend will receive a birthday cake, and 10 people will have the chance to win tickets to the festival for the next decade.

A giant 10-tier birthday cake is due to be unveiled during tonight’s headline act.

All 35,000 tickets for the weekend have been sold out, and it looks like festival-goers will be lucky with the weather.

Aside from the possibility of a passing shower this evening, it is expected to stay dry for the weekend, according to Met Éireann forecaster Eoin Sherlock.

Temperatures will be average for the time of year at 17-18 degrees and there will be a distinct chill in the air tonight, with temperatures dropping to 12-13 degrees.

Charity cycle
The Tour de Picnic – an 80km cycle starting from Dublin’s CityWest Hotel at 7am – will see 1,000 cyclists raising funds for the “Thank You Crumlin, Love Mia” and LauraLynn charities. There will also be a charity 10km run to the festival venue.

The roads are expected to be busy around Stradbally from early morning so festival-goers are advised to set off early. Campsites open at 9am.

This year’s Electric Picnic will feature a Sacred Space for the first time. Located in the Body&Soul area, the Sacred Space tent will be manned around the clock by volunteers during the three-day event.

The initiative is being spearheaded by Greg Fromholz, who leads the Church of Ireland Dioceses of Dublin and Glendalough’s youth ministry, along with Pamela Rooney of the Methodist Church and Scott Evans of Holy Trinity Church in Rathmines.

There was one piece of disappointing news for picnic-goers yesterday with word that legendary producer Giorgio Moroder, who was due to play in the Electric Arena tonight, has pulled out because of illness.