Fears raised over plans for mandatory isolation of travellers into Ireland 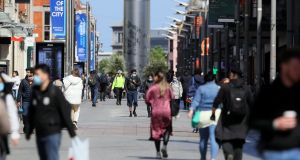 People on Henry Street in Dublin’s city centre on Friday as restrictions put in place due to the coronavirus pandemic have been eased. Photograph: Brian Lawless/PA Wire

Cabinet Ministers have expressed concern about proposals from public health officials to make it mandatory for travellers into Ireland to self-isolate for two weeks.

Ministers agreed on Friday to make it a legal requirement for travellers who arrive by plane or boat to fill out a form telling the State where they plan to isolate for 14 days.

From next Thursday, anyone who does not provide those details, or gives incorrect information, could face a fine of up to €2,500 or a six-month prison sentence.

Cabinet sources said Ministers discussed more stringent proposals, including making it illegal not to abide by the 14-day isolation period. However, fears were expressed at the meeting about the impact such a move would have on the economy in the longer term.

The National Public Health Emergency Team (NPHET) has already recommended to Government a mandatory regime of self-isolation for 14 days at a “designated facility” for all persons arriving into Ireland from overseas.

Minister for Health Simon Harris said while the issue of mandatory isolation raises “a number of legal questions”, the Government has not ruled it out and the issue will be examined further. He said he would investigate whether there is a need for the State to direct people to a designated place to isolate.

Meanwhile, travellers from the Republic and Northern Ireland will be exempt from the 14-day self-isolation period which is to be introduced in the UK from June 8th.

The North’s First Minister, Arlene Foster, welcomed the exemption of the Common Travel Area from the restrictions, describing it as a “generous move by the UK government”.

On Friday, NPHET reported the deaths of another 11 patients with Covid-19, bringing the total of coronavirus-related deaths in the Republic to 1,592.

Meanwhile, 115 new laboratory-confirmed cases of the disease were reported by NPHET, bringing the total number of cases to 24,506.

The Government has to inform private hospitals by the end of next week whether it wants to extend the State’s effective control of their facilities until the end of July.

Mr Harris updated the Cabinet on the arrangements currently in place between the HSE and private hospitals, saying it was “absolutely necessary and right to obtain this extra capacity”. The Minister added: “We are going to continue to need extra capacity in our health service because trying to manage Covid-19 will require extra time and extra space.”

Private sector consultants who are opposed to the initiative have suggested the State could retain about 400 of the 2,000 beds in the private system, with an option of securing more if Covid numbers increased considerably.

Some private sector hospital consultants are understood to be planning to establish a new representative body.

The organisation, to be known as the Association of Medical and Dental Consultants, is expected to be announced next week. The new body will be largely composed of fully private-sector doctors, however it may also seek to involve those in the public system to some degree.