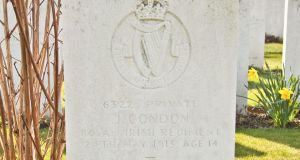 There is no first World War grave more visited or more controversial than that of the “boy soldier” from Waterford city Pte John Condon.

Condon was with the 2nd battalion of the Royal Irish Regiment when he was killed at Mouse Trap Farm near Ypres on May 24th, 1915.

His headstone states that he was 14 when he died. The Commonwealth War Graves Commission (CWGC) recognises Condon as the youngest British soldier to have died in the war.

His grave at Poelcapelle cemetery outside Ypres attracts coach loads of tourists usually schoolchildren. He has inspired novels, songs, poems and a play.

There is also a monument to his memory in his native Waterford unveiled last year and a service to mark the 100th anniversary of his death was held last month.

Retired Belgian schoolteacher Aurel Sercu has spent the last 13 years researching the short life of Condon and now maintains that he is not buried in grave LVI F8 in Poelcapelle cemetery.

Condon’s remains were only discovered eight years after he died. He was identified by a piece of boot which was stamped with the inscription 6322 4/RIR.

The battlefield clearance team assumed the RIR stood for the Royal Irish Regiment and 6322 was Condon’s service number.

Mr Sercu believes the boot belongs to another Irish-born soldier Rifleman Patrick Fitzsimmons from Raphael Street, Belfast. He was serving with the Royal Irish Rifles and was killed at 35 years of age on June 16th, 1915, three weeks after John Condon.

He too had the service number 6322. Fitzsimmons enlisted with the 4th battalion of the Royal Irish Rifles (RIR) so 6322 4/RIR would also match his service record.

Condon’s remains were found 3km away from Mouse Trap Farm in Railway Wood. It would be highly unusual for the remains of an unidentified soldier to be found so far away from where he fell.

Significantly, the regimental diary for the Royal Irish Rifles reveals that on June 16th, 1915, it was stationed between “Witte Poort Farm and railway”. This is where the body that is in Condon’s grave was located in 1923.

In what became known as the Battle of Bellewaarde, the Royal Irish Rifles suffered more than 300 casualties in an assault on the German trenches which was met with a “terrific artillery bombardment”. Fitzsimmons died during this assault.

His remains were never identified and his name is on the New Menin Gate to the missing in Ypres.

It has taken Mr Sercu until now to track down relatives of the man he believes is buried in Condon’s grave. In the intervening years he wrote to every Fitzsimmons in the Belfast phone book without success until he finally tracked down a retired British soldier Kenneth Hanna based in Cheshire. He is Fitzsimmons’s great-nephew.

One hundred years to the day after his relative died, Mr Hanna and his son Adrian visited both Railway Wood and Condon’s grave or as he believes the grave of their relative.

“Clearly from the stamping identified and because of the regimental battle histories, it cannot possibly be John Condon,” Mr Hanna says.

The only way the issue can be definitively resolved is through an exhumation and DNA test, something Mr Hanna acknowledges would be “very controversial” and hurtful to the Condon family who are “entirely blameless”.

“My honest feeling is that both soldiers gave their lives for the cause of freedom. That they are commemorated in error is a fact of history. To switch now would create a huge controversy.”

Mr Sercu says he is satisfied that his research is correct, but the issue should go no further as neither DNA testing nor a change of headstones would be palatable after 92 years.

“In other words leaving alone, at least as far as I am concerned, would be the best option,” he said.

Sonny Condon, whose father Nicholas was John Condon’s cousin and best friend, says it is too late at this remove to know definitively the truth about so many aspects relating to the John Condon story.

“Mistakes can be made, but my father said he was 14 and they were mates. Unfortunately, all the people who can answer these questions are gone. To me John Condon was a symbol of youth and the futility of war.”

For its part the CWCG continues to hold the view that Condon was the youngest British soldier to die in the war.

Spokesman Peter Francis said if anybody wishes to raise the issue of the soldier buried in Condon’s grave they should submit their request to the Joint Casualty and Compassionate Centre, a unit of the British army, for investigation.

He stated that the army graves registration teams who did the battlefield clearances after the war did an “incredibly difficult job and were rather expert at what they did. There were rather stringent guidelines. Some of those guidelines are still in place today.”