Family of woman missing since 2000 calls for inquest 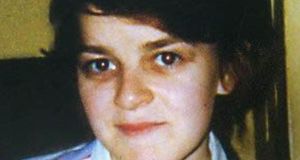 The family of a 29-year-old Co Mayo woman who went missing 16 years ago have called for an inquest into her death.

Sandra Collins disappeared from her home town of Killala on December 4th 2000. She was last seen at about 11pm after she bought chips in a local takeaway.

Two years ago a 50-year-old man accused of her murder was acquitted on the instructions of the judge in a Central Criminal Court trial.

Mr Justice Patrick McCarthy told the 12-person jury there was insufficient evidence to convict and directed them to find the accused not guilty.

Despite a major search in the aftermath of her disappearance, her body was never found.

During the court case, evidence was given that the missing woman had had a pregnancy confirmed the day she disappeared.

Her family has sought an inquest which will allow witnesses to give evidence publicly. They believe there is enough evidence to confirm she died.

RTÉ news showed TV footage of her speaking with Midwest Radio in 1995, aged 24, five years before her disappearance.

She had her arms around her brother Patrick, then aged eight. Family members hope the footage may jog people’s memories.

Family members have continued a long campaign for her body to be returned for burial.

Her sister Bridie Conway told RTÉ “it’s more poignant now and stronger than ever the need and want in us that we get her back and lay her to rest”.

It will be for Crossmolina-based Mayo coroner Dr Eleanor Fitzgerald to decide whether to hold an inquest.