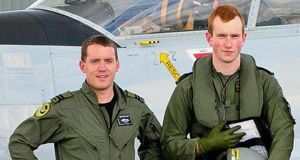 The parents of an Air Corps cadet, who died after his training aircraft crashed near Cornamona, Co Galway, more than five years ago, have won their battle to amend a military report which they believed to be “damaging” to their son’s professional reputation.

The subsequent Air Accident Investigation Unit report in January 2012 found that the probable cause of the accident was the spatial disorientation of the instructor pilot in conditions of poor visibility.

The subsequent coroner’s inquest in May 2012 recorded an open verdict in relation to the instructor pilot, Mr Furniss, and a verdict of accidental death in relation to Mr Jevens.

A military court of inquiry convened in July 2012, but Mr Jevens’s parents were not happy with its findings, published in January 2013.

They contended that the military court’s findings were at odds with the civilian inquiry.

They sought a meeting with former minister for defence Alan Shatter to seek the removal of what they stated to be “false” evidence in the military court of inquiry’s report, which, they said, was “damaging” to their son’s “military character”.

They said that the military court’s report contained “serious inconsistencies”, and questioned why the “most important post holders” in the Air Corps at the time were never interviewed, questioned or identified for their part in what they term “ failures of command and supervision”.

They also sought the inclusion of the full transcript of the two-day inquest into the crash in the report, rather than just the inquest verdicts.

However, Mr Shatter defended the report, stating that it was “consistent with the earlier investigations, namely that the probable cause of the accident was the spatial disorientation of the instructor who was piloting the aircraft in conditions of poor visibility at the time”.

In a statement, with which Mr Jevens’s parents agreed, the Department of Defence confirmed that remarks by the Defence Forces chief of staff had been added to the military court report.

The statement said that these remarks had “satisfactorily addressed particular matters of relevance that had for some time been of concern to Mr and Mrs Jevens”.

The statement said: “This gives further clarity to the findings of the report that no responsibility attached to the late Cadet Jevens for the incident that occurred.”

The department said that this had been confirmed at a meeting between Minister for Defence Simon Coveney and Mr Jevens’s parents, where Mr Coveney had offered his sympathies on the loss of their son.

“Separately, Mr and Mrs Jevens have concluded their civil action taken against the Minister for Defence relating to the tragic loss of their son Cadet David Jevens,”the department said, adding that it was “ not proposed to comment further”.

The State accepted liability for the crash at Galway Circuit Court in February 2014, when counsel for Mr Shatter, John Kiely, expressed Mr Shatter’s “sincere regret”, and the maximum amount of €25,395 was awarded to the Jevens family for the cadet’s death.