Boy in water for 10 to 15 minutes; a good portion of that time he was not breathing 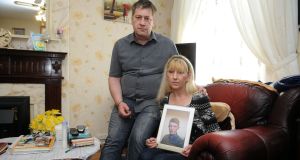 Seán and Bernadette Seoige Webster from Athlone, with a picture of their son Caolán. For his 16th birthday, his had a gathering at his grave, later releasing 16 balloons from the house. Photograph: James Flynn/APX

Some time in the early days of June 2015, somebody took a lifebuoy from its stand on the banks of the Shannon, just north of the railway bridge in Athlone. About the same time the lifebuoy was removed – it was later be found burned out on nearby waste ground – local schoolboy Caolán Seoige Webster turned 15.

At 6ft 1in, the blue-eyed Caolán was the apple of the eye of his extended family at St Patrick’s Terrace in Athlone. His parents Bernadette and Seán lived next door to Caolán’s uncle Pádraig and aunt Máire. Cousins and siblings wandered freely around both houses. Both sets of parents, like many in Athlone, warned the children of the dangers of the river.

Caolán’s parents say their son, who had just completed second year in the local Marist college, was proud of the way his body was developing. He played a lot of football and was looking beyond the next year’s Junior Certificate to a career in the Army, perhaps inspired by the town’s Custume Barracks. He wanted a small house, a field and two ponies, he told his mother.

None of that was to happen. On June 10th, his parents understood he was going to play football, but Caolán had met some friends and gone to the river. He was a competent swimmer.

Where the friends gathered wasn’t an approved swimming place and Caolán’s father thinks he may not have known the water was nine feet deep. It was also his first swim of the year and he may not have known Ireland’s waterways are still dangerously cold in June. In seconds he was in shock and struggling.

His mother thinks there was an element of bravado in getting into the river. He wouldn’t have wanted to appear “chicken”. His father says he was “just two arms lengths from a jetty” but nobody could reach him and the lifebuoy was gone.

Caolán was in the water for between 10 and 15 minutes, a good portion of that time he was not breathing. Members of the nearby Athlone Sub Aqua Club pulled him from the water and he was taken to hospital in Ballinasloe, before being transferred by helicopter to Temple Street Hospital in Dublin, where he died in the early hours of June 11th.

In Athlone yesterday, his parents, his uncle Pádraig and aunt Máire said they would like to think publicising their loss might help prevent such disaster happening to others. Seán was keen that people be educated to the fact that a stolen lifebuoy could mean a stolen life. He thinks phone numbers should be displayed on lifebuoy stands so people could report when the buoys were missing. “And cameras, if they are going missing a lot,” he said.

Bernadette emphasised the need for young people themselves to know and appreciate the dangers of water and bravado. Thursday would have been Caolán’s 16th birthday and Pádraig said they had a gathering at his grave, later releasing 16 balloons from the house.

According to Roger Sweeney of Irish Water Safety, Caolán’s case is a stark example of the many factors that can go horribly wrong. “People do underestimate the coldness of the water at this time of year and this often coincides with an overestimation of their own ability. People just don’t realise how dangerous water is,” he said.

Mr Sweeney is concerned that in about a month’s time, over half a million primary schoolchildren will be released for the summer break. “We created a water safety curriculum and introduced it in 2004 but we are only scratching the surface in terms of getting buy-in as it is a non-mandatory part of the curriculum,” he said.