FAI links with THG and Pro10 of natural interest 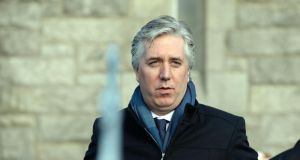 John Delaney: The fact that THG and Pro10 both have such strong links to football and/or the FAI makes the association’s chief executive an obvious person to field questions about them. Photograph: Cyril Byrne

It is hard to imagine that John Delaney will ever end up sitting in a Brazilian police station answering whatever questions the Rio de Janeiro investigators would like to put to him. But given the number of links to the football world in this Olympic ticketing story it is not remotely surprising that they have expressed an interest in having a chat.

The fact that THG and Pro10 both have such strong links to football and/or the FAI makes the association’s chief executive an obvious person to field questions about them.

Certainly it seems almost inconceivable that the 48-year-old was not asked at some stage for his views on, and experience of, the firms and the people who run them.

Delaney is certainly well acquainted with THG, the company owned by Ipswich Town’s Marcus Evans, with the FAI having struck a deal with them before the Aviva stadium opened to sell corporate packages for games at the new stadium.

THG is believed to have paid a significant sum to the association for the entitlement and the company also appears to have hoped to also gain access to some of the association’s allocation of tickets for major football games abroad, primarily European Championships or World Cups and Champions League finals. This appears to have come to nothing and the corporate sales end of things (not to be confused with the disastrous 10-year premium Vantage Club scheme which was marketed by IMG) is said to have gone very poorly, all of which put a strain on the relationship between the two sides.

But THG did have access to some 600, mainly premium level, tickets for all of Ireland’s home games over the last six years under the terms of a deal that expired just before this summer’s European Championships.

It is not clear whether the association ever had any dealings at a corporate level with Pro10 but it would be surprising if Delaney did not know its main leading figure, Eamonn Collins, the former Republic of Ireland under-21 international who managed St Patrick’s Athletic for a spell a little over a decade ago.

The two other directors of the company, Michael Glynn and Ken Murray, also have connections to the club having also worked for it in administrative roles but, of the three, Collins is by far the best known within the game here for his work as a players’ agent with senior international, Daryl Murphy, of Ipswich Town, his most high-profile client.

Quite how Pro 10, which had no track record of involvement in ticketing, came to get the OCI contract for Rio remains to be explained and many observers have raised the question of what, if any, tender process was run by the council.

Whatever the selection procedure employed, it would seem remarkable if Delaney had not been made aware in some way that three figures with strong links to the game generally, and the League of Ireland specifically, were to be given the contract.

In the circumstances, it is not hard to imagine why the Brazilian police might feel he is in a position to help them with some of the many outstanding questions that the entire controversy has thrown up.