Ireland should become ‘advocate for Britain’ after Brexit – former minister 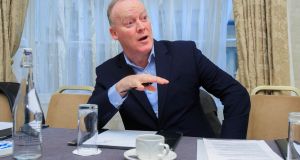 Conor Lenihan at the announcement that he wishes to be selected by Fianna Fáil to be its candidate in the upcoming European Election. Photograph: Gareth Chaney Collins

Ireland should become an “advocate for Britain” in Europe after Brexit, a former minister and aspiring member of the European Parliament has said.

Conor Lenihan, the former Fianna Fáil TD, also said he has “nothing to hide” on his previous working interests in Russia.

Mr Lenihan is seeking to be Fianna Fáil’s candidate for the Dublin constituency in the European elections, which will take place at the end of May.

He said an “olive branch” should be extended to London after Brexit is concluded, adding that Ireland and Britain often shared concerns at an EU level, such as on taxation.

“When the British have left, any Irish government that is in place and MEPs will have to actually defend and work for some of the items on the British agenda,” he said at his campaign launch on Friday.

After he lost his Dáil seat in 2011, Mr Lenihan worked as vice president of the Skolkovo Foundation, which sought to generate inward investment into Russia.

“Do I have anything to hide or worry about in terms of my work in Russia? Absolutely not.”

While he said he is not an “apologist” for Russia, he added that he has a much more “nuanced” view of the country.

“I’m just saying that realpolitik and global geopolitics demand that you have to engage with Russia.”

Mr Lenihan was a TD for Dublin South-West until he lost his seat at the 2011 general election. He also held a number of junior ministerial portfolios.

He is competing for the Fianna Fáil nomination against former Minister for Education Mary Hanafin, former Minister of State for Children Barry Andrews and Tiernan Brady, a key figure in the campaign for same-sex marriage in 2015.