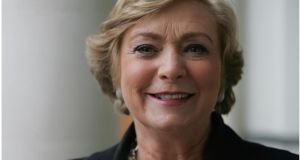 Minister for Children and Youth Affairs Frances Fitzgerald: “I think the real issues are about what is facing this country: getting our economy in track and job creation.” Photograph: Bryan O’Brien

People are not interested in the internal machinations of Fine Gael and what people were saying in interviews, Minister for Children and Youth Affairs Frances Fitzgerald has said.

“I think the real issues are about what is facing this country: getting our economy in track and job creation,” she said yesterday.

Her comments followed the meeting on Saturday of seven TDs and senators expelled from the Fine Gael parliamentary party. They held their first day of formal discussions on a collective approach in the Oireachtas.

Ms Fitzgerald said the consequences of voting against the abortion legislation was made clear to those involved.

“We need to move forward strongly as a party and it is up to the individuals involved to decide if they are going to support the Government,” she said.

Minister for Transport, Tourism and Sport Leo Varadkar said yesterday a key question for those outside the parliamentary party was whether it was a one-off issue and they were now prepared to support the party and the Government.

“But if that was not a one-off issue, and there is a number of issues they have difficulty with, then that is different and there really cannot be a pathway back for them if that is the case,” he added.

“But that is really a question for them and no one else.”

They examined economic reform, job creation “and all of the issues which are most pertinent to people”, Ms Creighton said.

The seven have formed the Reform Alliance and insist it is a loose grouping and not a new party in the making.

Asked if the group discussed how they could regain the Fine Gael party whip, she said: “We’re not troubling ourselves with that. The party leader Enda Kenny and senior colleagues have made it absolutely clear that there is absolutely no prospect of us being candidates under the Fine Gael banner for the next election.”

She went on: “Most of us are still members of Fine Gael and I value my membership but I also have a job to do as a parliamentarian.”

“We’re focused on the future – how we can have an impact in parliament and how we can put forward real solutions to the problems of the Irish people and that really is it,” she said.

Ms Creighton, whose is married to Mr Bradford, said that despite two of the group coming from the Seanad they were deliberately leaving open the question of abolition.

“We have a range of views on abolition. If the Seanad referendum is not successful and it lives to see another day, we are very much committed to both Dáil and Seanad reform. That will be included in our political reform proposals in due course.”

She added: “I have expressed my grave reservations about Seanad abolition, I think it is entirely premature.

“It is something that could and should only be considered in the context of wide-ranging reform which is not on the agenda at the moment,” Ms Creighton said.