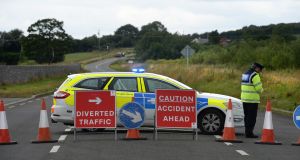 A former insurance adviser has been jailed for two years for his part in a series of staged car crashes in Cork city and county that led to insurance claims of more than €200,000 being made by a series of individuals. File photograph: Dara Mac Dónaill/The Irish Times

A former insurance adviser has been jailed for two years for his part in a series of staged car crashes in Cork city and county that led to insurance claims of more than €200,000 being made by a series of individuals.

As part of the investigation they examined three crashes on different dates in 2011: a collision at Redbarn Cross near Youghal, one at Clash West in Leamlara and another at Model Farm Road in Cork city.

Det Sgt Leahy said the same method was used in each crash.

Eight or nine people would meet up before the collision. They would then travel to the crash scene in two cars.

Everyone would get out of the cars except for the driver of one of the vehicles, who would crash into the front of the empty car.

The passengers would then jump back into the two cars and call gardaí and the ambulance service.

They would then make complaints over soft tissue injuries to the emergency services who arrived at the scene.

The occupants of the cars made claims against insurance companies, including Axa, Aviva and Quinn Insurance, following the crashes.

As soon as the insurers agreed to settle the cases and pay out, the passengers accepted the offers and passed them on to the organisers of the crashes, who gave them a cut of the monies.

Det Sgt Leahy said that in respect of the three crashes, some €165,000 was paid out in fraudulent claims.

Det Sgt Leahy told the court: “They [the passengers] were recruited prior to the traffic accident and told to go to the scene where the cars would collide and they would go back into the car after the accident.”

Sgt Noel Madden gave evidence in relation to three other crashes in 2011 and 2012 at Carrigane in Mitchelstown, at Clyda Bridge and Monastery Hill in Rochestown.

In the latter incident, gardaí watched Maher direct a driver to crash into a car a second time to make the damage look worse.

Sgt Madden said that in respect of the crashes in north Cork and Rochestown, claims totalling more than €60,000 were made.

Judge Sean O’Donnabhain said it was clear from the garda’s evidence that Maher was a principal offender in some of the crashes, as gardaí had video footage of him bringing people to the scene to participate in them.

“He was deeply and continuously involved, so there is no option other than imposing a custodial sentence,” said Judge O’Donnabhain, before acknowledging that Maher had entered a guilty plea.

“He is entitled to a significant deduction for that.

“He has expressed considerable remorse. He has put meat on that bone by providing €25,000 from his own resources by way of compensation.

“The amount lost to the insurance companies is quite significant. It is unlikely the full amount will ever be paid back.”

He sentenced Maher to three years in jail on one set of charges, but suspended the last year.

H also sentenced him to two-and-a-half years on another set of charges to run concurrently, with the last 18 months suspended.