Eircom says it has 25,000 customers without services and it could take ‘days or weeks’ to fix all faults 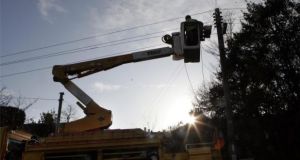 Power has now been restored to about 260,000 homes. Photograph: Dara Mac Dónaill / The Irish Times

ESB Networks said today 19,000 homes and businesses remain without power this morning and warned it could be the end of the week before supply was restored to all customers.

Paul Mulvaney, head of customer services with the ESB, said the company was still finding new faults had found three overnight; at Kilmore in Co Wexford, Tralee in Co Kerry and Cappamore in Co Limerick.

He said the worst affected areas in terms of power outages were in the south, the south west and around Enniscorthy.

Mr Mulvaney said he understood customers’ frustration but said that the destruction wrought by hurricane-force winds five days ago had seen 260,000 homes and businesses lose power, almost 12 per cent of the total.

ESB Networks has admitted that the scale of the damage and the difficult conditions were making the reconnection process “frustratingly slow”.

Mr Mulvaney also asked customers using generators not to connect them to the central circuit in a building. This power could travel through the network and injure repair crews working on faults, he told RTÉ’s Morning Ireland.

ESB Networks said some damaged sections of the network were proving extremely difficult to reach due to treacherous ground conditions and fallen trees. It indicated the process will continue for much of this week.

The company has deployed more than 3,000 people to work through the faults with additional crews redeployed from areas where power supplies have been restored to the worst affected areas, including Tralee, Newcastlewest, Fermoy, Dunmanway, Waterford, Killarney, Limerick, Tipperary, Bandon and Enniscorthy.

It warned the public not to go near fallen power lines as there was a chance that they could be live.

As school midterm breaks started across the State, ESB Networks asked parents, teachers and sports coaches to warn children in their care of the dangers of approaching fallen lines.

Eircom spokesman Paul Bradley said 25,000 of its customers remain cut off and said it would be “a matter of days and in some cases weeks” before all services were restored.

He confirmed that the company would continue to impose charges on customers whose service had been cut off in the storm.

He said more than 200,000 customers had lost service after the storm and the majority had been reconnected. Mr Bradley said the areas in the south, southwest and parts of the midlands were worst affected by loss of service.

A 65-year-old man was killed while carrying out repairs on part of the telecoms network in west Cork on Saturday afternoon.

Michael O’Riordan of Riverdale, Skibbereen, was part of a four-man team erecting a telephone pole on the Castletownbere road near Glengarriff, Co Cork, when the incident occurred.

His body was taken to Cork University Hospital, where a postmortem will take place today. Inspectors from the Health and Safety Authority carried out a site inspection yesterday afternoon.

Mr O’Riordan was well known in west Cork and was a prominent member of the the Skibbereen and District Car Club and was involved for many years with the Fastnet Rally. An autocross event in west Cork due to take place yesterday was cancelled as a mark of respect.