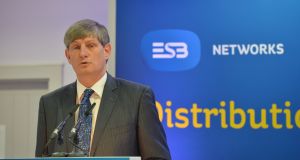 The ESB is to appeal a High Court ruling that found it was substantially responsible for flooding that caused an estimated €90 million of damage in Cork when it released water from its dams in the Lee Valley in 2009.

The ruling by Mr Justice Max Barrett in the High Court earlier this week that the ESB was 60 per cent responsible for €20 million worth of damage in UCC has left the company exposed to hundreds of other claims, totalling tens of millions of euro.

After taking legal advice, the ESB has decided to appeal Mr Justice Barrett’s ruling, as it believes the company prevented worse flooding in Cork by its actions on the night of November 19th, 2009.

“ESB fully defended this case because we believed and continue to believe that our operation of the dams complies with best international practice and with our statutory duties,” he said in a statement.

The unprecedented discharge led to heavy flooding of the west side of Cork city, with flood waters engulfing the Carrigrohane Straight, the Western Road, the Mardyke and much of the Marsh area all the way down to Washington Street and the Grand Parade in the city centre.

Confirming the decision to appeal the ruling, Mr O’Doherty said over its history, the ESB dams at Inniscarra and Carrigadrohid 13km and 30km upstream of Cork city had greatly reduced the impact of severe floods on the city.

“It was established in court and accepted by all that this was also the case during the 2009 flooding. The ESB staff on the night worked tirelessly to protect Cork from the worst impact of the flooding.”

UCC declined to comment on the ESB confirmation of its decision to appeal, but solicitor Joe Noonan, who has initiated legal actions for some 40 or so residents of the Lee Valley affected by the flooding, expressed disappointment at the ESB decision.