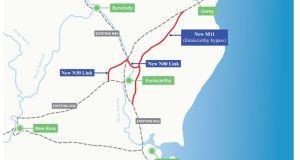 Travel times between Dublin and Wexford are set to improve from next week as the last leg of the M11 between Gorey and Enniscorthy is completed.

Transport Infrastructure Ireland (TII) said the new motorway will be opened by the Taoiseach and local representatives next Thursday and will deliver savings on the Dublin to Wexford route of 15 minutes during off-peak times and 30 minutes during peak times.

“There will be significant benefit for people in the mornings and evenings because you’ll no longer be getting caught up in local traffic in towns and villages,” a TII spokesman said.

“The real benefit is safety – some of the stretches of road there were notorious over the years.”

Construction on the M11 Gorey-to-Ennsicorthy scheme started in October 2015, and it totals some 42 kilometres of new road.

It incorporates a new 27km motorway from the end of the Gorey bypass at Clogh to the townland of Scurlocksbush, south of Enniscorthy, an 8km single carriageway bypass to the west of Enniscorthy, a 4km dual carriageway section linking the old N11 and N80 with the new motorway that crosses the River Slaney and associated side-road improvements.