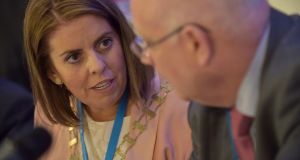 The Teachers’ Union of Ireland (TUI) is to ballot its 16,000 members for industrial action if the current two-tier pay structure in teaching is not eliminated by the autumn.

The union has also signalled that potentially there could be industrial unrest on three other issues: Government plans for the merger of institutes of technology, the requirement for teachers in institutes of technoloogy to carry out an additional lecturing hour - known as the “flex hour” - and over the Teaching Council’s “droichead” programme of professional induction for newly-qualified teachers.

The conference in Cork rejected attempts by the union leadership to remove a deadline of next September to secure pay equalisation for all teachers appointed after 2011 with those in place before then.

The motion passed by the conference called for the union to ballot members for industrial action next October if “discriminatory rates” for recent entrants to teaching remained in place in September.

The motion appeared not only to seek pay parity for recently-appointed teachers but also equalisation in pension entitlements. The Government introduced a new career average pension scheme for all staff appointed across the public service after 2013.

Minister for Education Richard Bruton told the conference that while gaps remained between the pay of those appointed before and after 2011, significant steps foreard had been made.

He said under a deal reached last year recently- qualified teachers would receive increases of 15-22 per cent. He said next year the starting salary for a young teacher coming out of college would be €35,600.

About 75 percent of the pay gap between the those appointed before and after 2011 had now been closed, he added.

Speaking after the conference the Minister said teachers had aprocess in the Public Service Pay Commission and theforthcoming talks with the Governmentto pursue their legitimate aspirations to seek improvements for their members.

However he said he had to be mindful of competing demands and a balance had to be struck.

“Pay equality is fine in the abstract but for me as a Minister , I have to make sure that I am fair and equal to all those who have a legitimate demand on my spending resource.”

Proposing the motion setting a deadline of September for pay equality to be eliminated or for a ballot on industrial action to be held in October, Eddie Conlon of the TUI’s Dublin colleges branch argued the issue was urgent. He said a commitment to ballot for industrial action would “put fire in the belly” of negotiators in the forthcoming talks on pay with the Government.

In an address responding to Mr Bruton, the president of the TUI Joanne Irwin said the union would engage in industrial action if pay parity was not achieved inthe forthcoming public service pay talks in May.

She said there was not a gap inpay between those appointed before and after 2011 but rather a “gulf”.

She said the next step for the TUI would be have restored the €1,200 HDip allowance which was removed in 2012.

Ms Irwin said the union would not rest until pay parity had been achieved.

“Our resolve is not to be under-estimated. Minster, the Teachers’ Union of Ireland is strong and indeed we are growing. Wee will talk but we are, at any point, prepared to take action is talking does not work.”