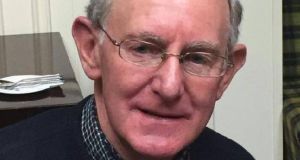 Johnny Hannon (67) was diagnosed with a genetic condition called Alpha 1 antitrypsin deficiency which led to him developing 80pc emphysema in his late 50s. Photograph: Facebook

An emphysema sufferer from Co Cork has compared his situation to that of someone on death row as he faces the prospect of a life-changing drug being no longer available to him.

Johnny Hannon (67) from Mallow fears he may be denied access to a drug called Respreeza due to a disagreement over its price between the HSE and the manufacturer.

He was diagnosed with a genetic condition called Alpha 1 antitrypsin deficiency which led to him developing 80pc emphysema in his late 50s and repeated lung infections.

Speaking to Colm Moore on The Neil Prendeville Show on Cork’s Red FM, Mr Hannon explained that Alpha 1 antitrypsin is a protein produced in the liver ¨which protects the lungs from environmental damage such as cigarette smoke which accounts for 90 per cent of emphysema cases.

“I was diagnosed with 80pc emphysema in 2002 despite having never smoked a cigarette in my life,” said Mr Hannon who told how he was then put on a two-year clinical trial for Zemaira in 2006.

“My health started to improve during the two-year trial and then we got a two-year extension and my health continued to improve and the end of the trial, the drug company [US pharmaceutical CSL Behring] decided to continue with the trial on compassionate grounds.”

“So they have done for that the last 10 years and my life has been transformed from almost being hardly able to walk from the house to my car to now being able to do the 5km Darkness into Light walk again which no way I could have done before I went on the drug.”

But last year, Mr Hannon and the other 300 people diagnosed with Alpha 1 antitrypsin deficiency in the State learned that the drug, now called Respreeza, had been approved by the European Medicines Agency and was now being put on the market.

“We got an inkling last May it was being approved by the European Medicines Agency which means it was going to become valuable and CSL Behring put us on notice that by September 2016 they would be ceasing the compassionate supply of the drug.

“Now, they’ve been extending it month by month since then up until next month but it’s almost like being on death row where you are expecting to be executed tomorrow and then you get a reprieve the night before.”

Mr Hannon said CSL Behring had indicated the drug would cost €84,000 plus VAT per annum per patient but the National Centre for Pharmacoeconomics, which assesses the cost effectiveness of drugs said it was only prepared to pay €45,000 per annum.

He said Fianna Fáil spokesman on Health Billy Kelleher brought him and other sufferers from the condition to Leinster House last week to brief TDs on the benefit of Respreeza. They were able to see how it had improved his life compared with a woman they met who was not on the drug.

“We would hope CSL Behring and the HSE would sit down and thrash out a deal but we are being kept totally in the dark and that makes it difficult,” said Mr Hannon. He added it was ironic the State was willing to fund tests to detect the condition but not pay for a drug to treat it.

The HSE in a statement said its drugs group had encouraged them not to pay the €84,000 plus VAT being sought by CSL Behring for Respreeza. The manufacturer now has 28 days to make representations to the HSE regarding that decision.