Emotional concert in Co Cavan for victims of Rescue 116

Helicopter dips its nose and circles the Cootehill fields amid applause 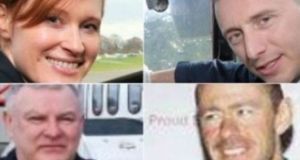 When the body of Irish Coast Guard copilot Capt Mark Duffy was recovered from the wreckage of Rescue 116 five months ago, an Achill Coast Guard piper marked the return to shore to the strains of Fáinne Geal an Lae.

As the sun set over the north Mayo coastline on Friday night, the same haunting tune was relayed from Blacksod – by video link – to Cootehill, Co Cavan.

The occasion was a memorial concert to the four air crew who died in the helicopter crash on March 14th. It was also a celebration of the lives of Capt Duffy, Capt Dara Fitzpatrick and winch team Paul Ormsby and Ciarán Smith.

It was held as part of Cootehill Arts Festival and involved a link with Blacksod lighthouse’s tower, where a member of the Clew Bay pipe band played the familiar opening of Dawning of the Day before 37 colleagues took up the tune marching into the festival marquee.

All day, there had been heavy clouds, interspersed with bursts of sunshine, but there was a brief break in the weather as the Irish Coast Guard Rescue 116 helicopter on duty in Dublin took off on a navigational route northeast.

Pilots Capt Ed Shivnen and Lorcan Brereton and winch crew Christy Mahady and Alan Gallagher were greeted by several hundred people applauding, as the helicopter dipped its nose, circled the Cootehill fields and flew back south.

Musicians Triona Marshall and Martin Tourish, Declan O’Rourke, Matt Molloy, Janice Igoe and the Roscommon Solstice Choir were among the artists who participated , with the Clew Bay pipers, at the sell-out event. All artists gave their time for free in aid of the Royal National Lifeboat Institution (RNLI).

“This is very close to our hearts, as seven of us are from Achill and we know the Irish Coast Guard and RNLI volunteers,” Clew Bay Pipe Band sergeant Peter Carney had explained beforehand.

The band’s pipe major Des Cafferkey had composed a piece for the four crew, called Irish Heroes, which was performed for the first time in the marquee. There was hardly a dry eye when the Mayo musicians, the Roscommon singers, Declan O’Rourke and company performed Leonard Cohen’s Hallelujah on stage.

Master of ceremonies was RTÉ broadcaster Ray D’Arcy, who conveyed the sense of sorrow felt so widely for the bereaved families represented at the event. The bodies of Paul Ormsby and Ciarán Smith have not been found, in spite of extensive searches.

Britain’s Prince William, a search and rescue pilot, had once met and shared a joke with Paul Ormsby on a joint rescue mission. He was among the contributors to the programme, put together by artist and Cootehill Arts Festival chairman John Blakey, who is an uncle of Capt Fitzpatrick.

“The crew of 116 lived their lives to the full, not just for themselves but for all of us,” Prince William wrote. “They will never be forgotten.”

In his contribution, President Michael D Higgins said that “citizens like Dara, Mark, Ciarán and Paul greatly enrich our world, and make a profound contribution to the creation of strong and compassionate communities”.

Dr Órla Smith, sister of Ciarán, acknowledged the “astonishing outpouring of love” after the crash, and how the families had been “enveloped in a blanket of support and solidarity”.

“Music is the universal language of love and loss,”she said of the concert. “We will never forget.”