Singer’s ancestor fled Ireland for the US in the 18th-century after assault, paper shows

An 18th century document to be sold at auction by Whyte’s in Dublin next month proves Elvis Presley’s Wicklow ancestry and also explains why the ‘King’ was born in America and not Ireland. Video: Bryan O'Brien 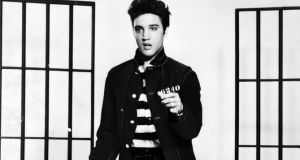 The document, from 1775, which will be auctioned in a Dublin saleroom on May 14th, concerns legal proceedings brought by William Presley, the singer’s great-great-great-great-grandfather.

Originally from the townland of Stranakelly near Shillelagh, Co Wicklow, Presley, a farmer, claimed he had been savagely assaulted by a group of men in Hacketstown, in neighbouring Co Carlow.

In Carlow Court of Assizes on August 25th, 1775, he claimed that he had been “violently insulted, assaulted, beat and abused” by a group of Wicklow men.

He said the men had used their “whips and fists, dragged him down by the legs”, and when down, gave him “several kicks in his body and face”, all “without any provocation”.

The men were “swearing they would have his life”, he told the magistrate. Presley said he was now in “great dread and fear of his life”.

The magistrate agreed to list the case for a further hearing.

It is not known what happened next in the court, but Presley emigrated to the US later that year - with his son Andrew - and first settled in New Orleans.

The document is in Whyte’s Auctioneers Eclectic Collector sale on May 14th and has an estimate of €500-700.

Auctioneer Ian Whyte said: “Elvis’s great-great-great-great-grandfather left Ireland after being attacked . . . this document proves the link and explains why Elvis was born in America.”

According to the catalogue notes, William Presley later moved to Tennessee, where he died in 1802.

His granddaughter Rosella “never married but had several children and one of these was a son called Jesse Presley”.

In 1913, Jesse married Minnie Mae and they gave birth to one Vernon Elvis Presley in 1916.

“Vernon married Gladys Love Smith in 1933 and their son Elvis Aaron Presley was brought into the world in January 1935.”