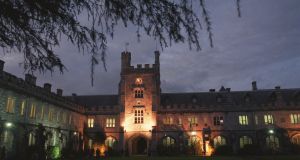 The doctorates will be awarded by University College, Cork. Photograph: Denis Minihane

The CEO of a non-profit company aiming to educate a billion people around the world for free is among those set to be awarded honorary doctorates by University College Cork (UCC) today.

Online education for students across the globe is the single biggest shake-up in education since the printing press, according to Anant Agarwal, CEO of edX, a massive open online course provider founded by Harvard and MIT, which offers free classes from top universities to anyone in the world.

The third recipient, Desmond McHale, Emeritus Professor of Mathematics at UCC, has been teaching for more than 40 years at UCC. A prolific author, he wrote the first biography of George Boole – one of the great unsung architects of the technology we enjoy today.

The fourth recipient, Sr Mercedes Desmond (93), has championed science education in Ireland for more than 60years. She began studying physics in UCC in 1945 and has also had a lifelong interest in astronomy.