Chloe Agnew and her father David discuss their relative Arthur Agnew who was born in Liverpool and ended up fighting in the GPO during Easter Week. Video: Ronan McGreevy 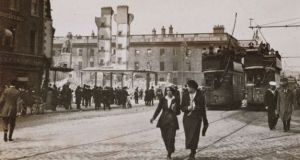 There was standing room only in the basement of the National Library of Ireland for the launch of The 1916 Rising Oral History Collection.

Not since 1966 have so many relatives of those who fought in the Easter Rising gathered under the same roof.

The collection of 245 recordings, collated by Maurice and Jane O’Keeffe, has been handed over to the National Library for safekeeping.

The last surviving child of an executed leader of the Rising, Fr Joseph Mallin SJ, was recorded in Hong Kong for the oral history project as was Dorothea Findlater, the 105-year-old daughter of Capt Henry de Courcy-Wheeler. He was the adjutant to Gen William Lowe and is pictured in the famous photograph of Pearse surrendering to Lowe.

President Michael D Higgins said the collection remembered “both the sung and unsung heroes of that time, all of which are critical elements of the whole, and all equally important in enabling us to engage with history and commemoration in a way that is inclusive, ethical, and honest”.

The collection plays a vital role “in enabling and protecting a clear and more inclusive story of our nation”.

The President warned against the desire to “compete with each other in tendentious judgments” of the past.

Among those present were David and Chloe Agnew. David’s father, Art, was interviewed for the project before he died in November last year.

His father Arthur Agnew was born in Liverpool, but joined the Irish Volunteers. In early 1916 he fled conscription in Britain to fight in the Rising. He was with Joseph Mark Plunkett on Easter Monday 1916. Plunkett famously paid fares for all the volunteers who took a tram from Harolds Cross into the city centre. Agnew was originally part of a contingent deployed to stop British soldiers crossing O’Connell Street, but later retired to the GPO.

“He was one of the real guys who ended up in the GPO,” said David. “I’m very proud that he was prepared to risk his life for the Irish cause. His grandfather had fought with the Fenians so he hadn’t licked it off the stones.”

Bernadette Marks’s father Jimmy Marks was part of the 5th battalion of the Irish Volunteers and was posted to the Mendicity Institute on the Quays. He was sentenced to death, but the sentence was commuted. He died when Bernadette was just six months old. “To me it was like something out of a fairy tale. My mother asked him, ‘Were you delighted that your sentence to death was commuted?’ and my father replied, ‘No, I had my mind made up to die for Ireland’.”

Liam Heron’s father Jimmy Heron had the highly dangerous task of delivering messages under fire from the Imperial Hotel in Sackville Street to the GPO, but lived to tell the tale. “He escaped without getting shot which is why I’m here today,” said Liam.

Sheila O’Leary had the rare distinction of having both her parents in the GPO in 1916, her father Thomas ‘Boer’ Byrne and Lucy Agnes Smyth, of Cumann na mBan.

Now 94, she expressed satisfaction at being around long enough to see the centenary of the Easter Rising. “I feel very proud to be here. I’m wondering why I’m still around. This is a great day.”