Easter Rising families gather from across the globe for commemorations

Padraig Pearse’s great grand-nephew Ben Phillips on the love of justice which endures. We speak to him as he visits the GPO. Video: Ronan McGreevy 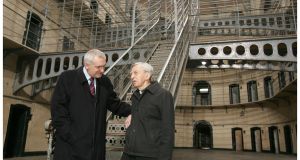 Fr Joseph Mallin, son of Michael Mallin, with then taoiseach Bertie Ahern at Kilmainham Gaol in 2006. Now aged 102 and living in Hong Kong, Fr Mallin was this week awarded the freedom of Dublin. Photograph: Alan Betson

Patrick Pearse’s closest relative and the nephew of a famous RAF flying ace are among those who will be attending this weekend’s Easter Rising commemorations in Dublin.

Ben Phillips’s great-grandmother, Mary-Kate, was Pearse’s first cousin on his mother’s side. Her mother, Catherine, and Pearse’s mother, Margaret, were sisters.

Mary-Kate was taken in by Pearse’s father and mother after she was orphaned, and was later adopted by them.

Mr Phillips now lives in Nairobi, Kenya, where he is is international director of policy for the charity ActionAid.

Mr Phillips, whose great-grandmother married an Englishman and then moved to England, describes himself as English, like Patrick Pearse’s father.

“I have never met an Irish person for whom this matters,” he says. “This is partly because Ireland is a nation of emigrants, its sons and daughters spread across the globe, from Canada to New Zealand and everywhere in between, and so the Irish sense of national family is broader.”

He maintains that the Easter Rising was more a rising against injustice than it was against the English.

“It is a rejection of the empire, a rejection of policies that made people feel second class,” he says. “The importance of idealism and justice and the potential for a better world and the refusal to accept things as they are – those values were strongly passed on.”

Mr Phillips describes the Easter Rising as Ireland’s “gift to the rest of the world” and said it was the inspiration for anticolonial movements everywhere.

Some 3,500 relatives of those who fought in the Rising will be present for the commemorations this weekend, which include a State reception in the RDS that will be addressed by President Michael D Higgins.

One of the biggest contingents will be relatives of Walter Bell, a printer who was in the GPO. Among those who will attend the Easter events are his surviving son, Louis, who lives in Alberta, Canada, and Louis’s children, who are based in Edmonton, Vancouver and Montreal. Other relatives will attend from Canada, the United States, Germany, England, Wales and Ireland.

Bell’s granddaughter Eileen Bell says: “This is our opportunity as a family to get together, which we love doing, and it is our opportunity to collectively mark that contribution for the next generation and to get an impression of what Ireland is like now.”

Another family who will have a large overseas representation is the family of executed Rising leader Michael Mallin. His son, Fr Joseph Mallin (102), who is still alive but based in Hong Kong, will not attend. The Jesuit priest received the freedom of the city of Dublin this week, in a ceremony in Hong Kong.

Michael Mallin’s great-grandson Gregory will be travelling from Hiroshima. Other members of the Mallin family will travel from Canada and Germany.

The grandson of an Easter Rising rebel who is also the son of a second World War RAF pilot says he is delighted to be attending. Brendan Finucane QC, a judge at the Old Bailey in London, was asked by Taoiseach Enda Kenny to attend as a relative of one of the veterans of 1916, and will do so in the company of his son Cian.

His grandfather Andy Finucane was in the Four Courts garrison as a second lieutenant under the command of Ned Daly, but his father, Raymond, joined Bomber Command and then Fighter Command during the second World War.

His best-known relative is his uncle, after whom he is named. Wing Commander Brendan “Paddy” Finucane was one of the most famous British fighter pilots of the second World War. His short life – he died aged 21 on a sortie to France in July 1942 – is soon to be the subject of a documentary titled Spitfire Paddy: The Ace with the Shamrock.

Mr Finucane said his family story was a “bringing together of so many strands of Irish and English history, given the transition from my grandfather to my father and uncle. I’m delighted this is happening at a time of mutual understanding when the Queen’s visit to Ireland was welcomed by a very large percentage of the population of Ireland.”