DUP in dilemma over whether to take education ministry 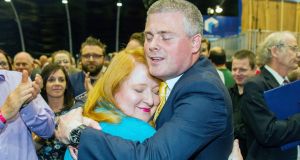 Naomi Long of the Alliance Party is congratulated by her husband Michael Long after being elected as MLA for Belfast East. Photograph: Liam McBurney/PA

The DUP has first choice of which ministry to take in the new Northern Executive which is scheduled to be formed in two weeks’ time. Sinn Féin will have the second choice.

The DUP, as deputy leader Nigel Dodds conceded, is faced with the dilemma of choosing the finance department, as it has done in the past, or opting for the economy or education departments.

Mr Dodds said at the weekend that the party would take time to decide which portfolio to take on first, while acknowledging it faces a hard choice between finance, education and the economy.

While there are eight full departments to be allocated, seven of them will be awarded under the d’Hondt system of appointing ministers. This is a system where departments are allocated based on the proportional strengths of the parties.

Under d’Hondt, the DUP is entitled to four ministries, Sinn Fein to three and one each to the Ulster Unionist Party and the SDLP.

Alliance, which won eight seats in the Assembly election, does not have sufficient strength to be allocated a department under d’Hondt. It, however, has a very good chance of taking the justice portfolio which is outside the d’Hondt process.

That is because, mutually, neither the DUP nor Sinn Fein, which dominate the Executive, is likely to accept a Minister from either party in charge of justice.

There is a possibility that the two parties could agree to rotate the department over the lifetime of the Assembly, but a more likely scenario may be that it will apply the compromise agreed in 2010 where Alliance, which is designated as neither unionist nor nationalist, takes the post.

The outgoing minister of justice and Alliance leader David Ford said he is standing down from that role. He said that either Naomi Long, who was elected in East Belfast, or Dr Stephen Farry, who was returned in North Down, would be in line for the job if Alliance had the taking of the department.

The DUP is under pressure from some supporters to take over education which, since 1999, apart from periods of suspension, has been in the hands of Sinn Féin.

Mr Dodds indicated it would be difficult for his party to forego finance because the department “holds the purse strings” of Stormont.

Equally, however, there is a chance that as its first choice that Sinn Féin might opt for the economy rather than education. A possible contender here if that does happen is South Belfast MLA Mairtin Ó Muilleoir, who also is a publisher and businessman.

Under d’Hondt, the DUP will have first, third and sixth choice of ministries and Sinn Fein will have second and fifth choices. Assuming they enter into the Executive rather than go into opposition, the Ulster Unionist Party will have fourth choice and the SDLP will have seventh (and last) choice.

In such a case, the UUP could take health with UUP leader Mike Nesbitt having to decide whether he wants to take on a ministry or hand it to a colleague, such as former regional development Minister Danny Kennedy, or some other party member.

SDLP leader Colum Eastwood will be faced with the same decision with his choice.

Ireland ‘not at all happy’ about ‘disproportionate’ fish quota loss - Minister 13:54
Two charged with trying to murder man in Dublin shooting last year 13:42
Weekend weather warning issued as snow and freezing conditions forecast 13:57
Belmullet GP with Covid-19 speaks of ‘fear and dread’ in community as cases surge 13:17
Covid-19: Current travel rules ‘will not stop’ all cases coming into State – Glynn 13:14