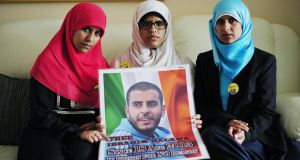 Omaima (left), Fatima and Somaia Halawa holding a picture of their brother Ibrahim who is in prison in Egypt. Photograph: Aidan Crawley

Friends and family of Irish citizen Ibrahim Halawa, awaiting trial in Egypt, staged a vigil outside the Egyptian embassy in Dublin on Saturday afternoon to mark his 19th birthday.

He and his sisters were arrested and charged with protesting in Ramsis, Cairo, in August 2013 where at least 97 people died.

Mr Halawa is charged with murder, attempted murder and destruction of public property during an attack on a police station in August 2013.

He was among nearly 500 people arrested at Cairo’s Al-Fath mosque following protests against the ousting of former Egyptian president Mohammed Morsi last year. Mr Halawa and his 493 co-accused will go on trial on January 6th.

His sisters Somaia (28), Fatima (23) and Omaima (21) were also arrested and detained for three months. They were released and returned to Ireland.

The Halawa siblings’ father is Sheikh Hussein Halawa, Ireland’s most senior Muslim cleric, imam of the mosque and head of the Islamic Cultural Centre in Clonskeagh, Dublin.

“We are extremely distressed about [Ibrahim’s] ill-treatment and don’t believe he can get justice in Egypt,” said Somaia. “It has been a year and four months since he has been home with his family.

“Although we, his sisters, have been released on bail we continue to suffer daily knowing that our brother must endure the physical and mental torture we went through.

“It is only the people of Ireland that can help show the oppressor from the oppressed. We his family urge them to take Ibrahim to their hearts and continue to call for his release.”

The family were joined by representatives from Amnesty International Ireland.

Executive director Colm O’Gorman said Mr Halawa is in jail accused of crimes he did not commit and “awaiting a trial we do not believe will be fair or in accordance with due process. If convicted, he could face the death penalty.

“The Egyptian authorities must release this prisoner of conscience immediately and drop all charges against him.”

Maya Foa, strategic director of the death penalty team at legal charity Reprieve, which is assisting Mr Halawa, said his continued detention is a “ flagrant violation of international law – the international community must call urgently on Egypt to end his ordeal, and that of many others like him.”