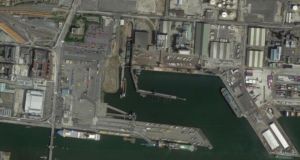 A planning hearing has opened into Dublin Port plans to redevelop Alexandra Basin in the north Port area - the first part of the port company’s “Masterplan 2012 to 2040”.

A €200m plan to redevelop a large section of Dublin Port and deepen the navigation channel to allow for bigger container and cruise ships was outlined at a planning hearing yesterday.

The work does not include infilling of Dublin Bay, such as the plan to reclaim about 52 ares in the vicinity of Clontarf Yacht Club which was turned down by An Bord Pleanala in 2010.

Presenting the plan at a Bord Pleanála hearing yesterday Dublin Port Company chief executive Eamonn O’Reilly said the proposed phase of redevelopment would concentrate on the Alexandra Basin area in the north port .

It would involve rebuilding and lengthening almost half of the berths, some of which are at the end of their usable life; dredging the navigation channel a distance of 10 kilometres from the East Link bridge out into the bay to cater for larger ships; and removal of infill in the west basin area which is believed to be contaminated.

It also includes restoration of an old graving dock, new roll on-roll off ramps and creation of a cruise ship terminal, with a tourist information and interpretative centre.

A small number of works are earmarked for the south port area including construction of a retaining wall to protect against tidal surges at the Poolbeg Marina. There would be a new bridge over the water channel which brings cooling water to the ESB power station.

The development would also allow Dublin Port to cater for the lucrative cruise ship business, and the planning inquiry is being watched by Dun Laoghaire Harbour Company which is also competing in the same business.

Environmental impact statements in relation to EU-protected areas and the protection of birds have been submitted with the planning application.

Some 38 statutory prescribed bodies are listed among those who may have an interest in the project. Thirty interest groups have sent in written submissions to Bord Pleanála and are expected to be heard over the next week. They include Clontarf Residents Association, Dublin Bay Watch, the Sandymount and Merrion Residents’ Association, An Taisce and the Green Party.

Giving evidence yesterday harbour master Capt David Dignam said widening the channel from a seabed width of 160 metres in its narrowest section to 200 metres would eliminate a “single-lane-only” stretch, where ships were forbidden from overtaking or passing each other in opposite directions.

He said the proposed deepening of the channel from -7.8 chart datum, to -10 chart datum would make the port significantly more accessible, eliminating tidal restrictions currently in place.

Capt Dignam also said lengthening of almost half of the berths in the port would enable it to handle ships of up to 350 metres in length, more then 50 metres longer than the current largest.

The Port Company is due to continue its evidence today.