Dublin Metropolitan Police constable killed by IRA to be remembered 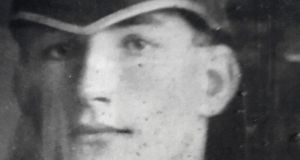 Constable Michael Downing, a long-forgotten casualty of the War of Independence, will be remembered in his native west Cork this weekend. Photograph: supplied by Fachtna O’Donovan

One of the first and long-forgotten casualties of the War of Independence will be remembered in his native west Cork this weekend when a commemoration will be held at the graveside of Dublin Metropolitan Police constable Michael Downing.

Local historian Fachtna O’Donovan of the Beara Historical Society says Downing (23), a farmer’s son from Adrigole on the Beara Peninsula, was “simply in the wrong place at the wrong time” when he was shot by members of the Dublin IRA in 1919.

“Constable Downing was walking his beat at 2am on October 19th, 1919, near Christchurch in the Liberties and was crossing the street when one of a group of men on the other side of the street pulled out a revolver and shot him as he approached them,” he said.

“His first words to a bystander who ran to his aid were ‘I’ve been shot – get me a priest – pray for me’. He remained conscious for some time and despite getting a blood transfusion from a colleague, he died some 19 hours later.”

Mr O’Donovan says it later emerged that a unit of the Dublin IRA was using a warehouse on nearby Winetavern Street as an arms dump and it is believed that members of the unit feared that they might be discovered and shot Downing.

“There were several references in the military archives to IRA men collecting guns from this dump – there was even a reference to Michael Staines, who was the first Garda commissioner, collecting arms from that IRA arms dump near where Constable Downing was shot,” he says.

For Mr O’Donovan, the shooting of Downing highlights both the tragedy and the complexity of Irish history as it now appears that one of the IRA men present at the shooting later joined the successors to the Dublin Metropolitan Police, An Garda Síochána.

“In 1949, a Garda Patrick Egan made a statement to the Military Bureau of History in which he refers to the shooting of the young constable, saying a few of the lads were moving explosives and they shot him – Garda Egan was in the IRA at the time so he knew those involved.

“But it now appears that he was the same Pat Egan who was the first witness called to give evidence at Constable Downing’s inquest where it emerged that he actually stayed with Constable Downing after he was shot, until help arrived and he was taken to hospital.”

To highlight even further how complex Irish history can be for many families, Constable Downing’s brother Mark later played a prominent part in the War of Independence, being interned along with other members of the IRA on Bere Island, says Mr O’Donovan.

“The shooting of Michael Downey wasn’t like the assassinations of G Men ordered by Michael Collins. He was an ordinary policeman who was simply in the wrong place at the wrong time – he was serving neither king nor country but simply walking the beat, serving his community.”

The story of the shooting of Michael Downing will be remembered at a commemoration at his graveside in Adrigole Cemetery at 3pm on Saturday, hosted by the Beara Historical Society with the support of the Harp Society, which remembers all who served as police in Ireland.