Dublin Bus drivers: Why we are going on strike 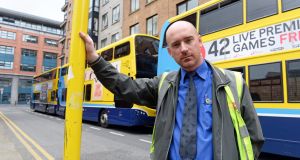 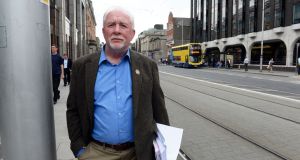 Bill Mc Camley: “We can and do get assaulted and have to manoeuvre buses in all types of situations.” Photograph: Eric Luke / The Irish Times

There is a lot more to the role of a bus driver than just driving a bus, says Brendan Farrelly, who drives route 145 from Heuston Station to Bray.

He says it is a very “serious challenge” to drive a bus through the centre of the city, particularly with the current Luas works taking place.

“Unlike Luas we are not on tracks, we have to weave in and out with the Luas works. Obstructions could be on one side of the road this week and on the other side next week.

“Driving from Heuston Station to the city centre, that once took 10 or 12 minutes, can now take 20-30 minutes. You just cannot judge it.”

He says in recent years there has been a huge increase in traffic and passenger numbers. A difficult part of the job, he says, can be cyclists weaving in and out of traffic and people wearing headphones stepping out in front of buses.

“It is chaotic out there sometimes, particularly Tuesdays and Fridays for some reason.”

Farrelly would like to apologise to passengers who will be affected by the strikes but says staff are being forced into industrial action. They are not hitting out at Dublin Bus specifically but rather at how governments have reduced the State’s subvention to the bus service. He said the Labour Court’s recommended pay offer amounted to 2.75 per cent per year for three years. Luas drivers received increases of 3.8 per cent annually over 55 months.

He said if both deals were followed through to the end, the difference in pay between a Dublin Bus driver and a Luas driver could be about €10,000.

“Driving a bus is considerably more challenging than driving a Luas. Luas made a loss over the last three years while Dublin Bus made a profit of €23 million. Surely we were entitled to something similar if not better considering the work we do.”

Farrelly, a shop steward with the NBRU, is assigned to the 145 route . Yet younger staff can spend up to 10 years or more as “spare drivers”, being allocated different routes and shifts daily.

Bill McCamley has worked for 43 years as a Dublin Bus driver and will be on the picket line just after 4am today (Thurs). A senior driver on Route 122 from Cabra to Drimnagh, he believes there is more public sympathy for the workers than in other disputes “because it’s not just us who have endured the unendurable”.

The 65-year-old SIPTU member is divorced with two grown-up sons, one of whom is ill and living with McCamley, who gets a €39,000 salary from Dublin Bus and works a five-day week. His pension – also part of the pay claim – will be €126 weekly, higher than €97 weekly for a Dublin Bus engineering operative but less than €175 for a train driver.

During his career, Bill has been spat at, verbally abused and punched in the face but stresses only a minority of passengers behave like that.

The most bizarre incident he can recall was when a colleague’s bus was hijacked by a man with a samurai sword who insisted the driver take him to Blanchardstown. The driver drove straight to Blanchardstown Garda station and fled.

Stresses and health issues experienced by bus drivers in a “gridlocked city” have not changed materially since a 1922 medical report noted drivers were particularly susceptible to heart attacks and high blood pressure, McCamley says.

“Unlike other public transport drivers, we deal directly with the public. We can and do get assaulted and have to manoeuvre buses in all types of situations.”

The workers are striking due to stagnation in their wages from 2008 when they made “enormous sacrifices” to help the company recover, which it did in 2014. The offer of an 8.2 per cent pay increase over three years is too low when the cost of living has increased since 2008 with property tax and other measures not normally mentioned in indexes such as car insurance, he says.

He can understand some passengers will be frustrated and annoyed by the strike and says it is “regrettable it has come to this” as he considers Dublin Bus a reasonably good employer compared to more “primitive” ones. He also regards strikes as “a failure” because people lose money and services. “The sooner some thinking and some proper resolution occurs, the better.”

He likens the workers’ 95-98 per cent level of support for industrial action to “an election in North Korea”. He also believes the Department of Transport has given “the green light” to Dublin Bus for its position and the National Transport Authority (NTA) is “sitting over there in splendid isolation when they are critical to this”.

He is particularly scathing of “inaction” by Minister for Transport Shane Ross.

He describes Dublin Bus as a good firm but undercapitalised and subject to a “bizarre” funding mechanism through the NTA . He hopes the debate surrounding this strike will extend to how the company is funded: “We cannot go on subsidising the underfunding of Dublin Bus.”