Drug-smuggling yacht attracts lots of interest prior to Cork auction

Up to 20 potential buyers have viewed the ‘Makayabella’, says auctioneer Dominic Daly 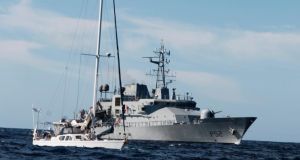 The LÉ ‘Niamh’ with the ‘Makayabella’ after she was seized by a boarding party who found 1,025 kgs of cocaine worth €290 million on board. Photograph: Defence Forces Ireland/PA Wire

A yacht at the centre of one of Ireland’s biggest drugs seizures has been viewed by up to 20 potential buyers ahead of being auctioned in Cork tomorrow.

Auctioneer Dominic Daly said the 62-foot Makayabella, which was built in 1986 in a French naval shipyard in Antibes, has attracted interest from Ireland and overseas.

“I’ve had close to 20 different parties come to the Naval base at Haulbowline to view her over the past few weeks, mainly Irish people, but also some from the UK and New Zealand, ” Mr Daly said.

He said the British drug-smuggling gang which was using the vessel to ship €290 million worth of cocaine across the Atlantic had paid more than £100,000 for it.

“She’s a fine boat with good lines and well designed, but she does need a new set of sails after they were blown out in a storm while crossing the Atlantic with her last cargo,” Mr Daly said.

The Makayabella made headlines last September when she was seized by a boarding party from the LÉ Niamh after they found 1,025 kgs of cocaine worth €290 million on board. The seizure off the Cork coast was thea result of a joint taskforce operation involving the Naval Service, Customs and the Garda.

Lieutenant Commander Eric Timon of the Naval Service said the yacht had been kept in a secure area at Haulbowline since its detention.