Ovens to Carrigaline service gets stuck on Church Road in Douglas 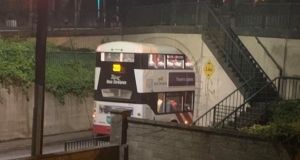 The bus became wedged under the 3.4 metre high bridge. This picture was posted on Twitter by Cork Safety Alerts.

Bus Éireann has begun an investigation after one of its double decker buses became wedged under a bridge in Cork city when the driver took a wrong turn on a suburban route.

No one was injured when the double decker on the 220 Ovens-to-Carrigaline route took a wrong turn after leaving the Fingerpost in Douglas and went down Church Road by mistake at around 11.15pm.

The driver continued along Church Road but the bus became wedged under the 3.4 metre high bridge which carries the Carrigaline Road overhead back into the centre of Douglas village.

The bus which got stuck in Douglas, was safely removed in the early hours of this morning. pic.twitter.com/by3qJ9rThd

Nobody was injured in the incident and passengers from the bus were evacuated safely from the vehicle and were able to continue on their journey when Bus Éireann provided a substitute bus to take them to Carrigaline.

Gardaí closed off Church Road and put diversions in place as Bus Éireann staff and Cork City Council assessed the situation before a decision was made to try towing the bus back out from under the bridge.

A Bus Éireann tow truck was able to pull the bus back out from under the bridge and the bus was brought back to the Bus Eireann depot in Capwell where it underwent a full inspection.

It’s understood that the bus suffered just minimal damage to its roof in the incident which was posted on Twitter by Cork Safety Alerts.

Engineers from Cork City Council also carried out an inspection of the bridge and after they were satisfied that it had suffered no structural damage in the incident, both Church Road and the Carrigaline Road re-opened to traffic.

1 Des Bishop apologises to Traveller community for comments in interview
2 One hundred Irish retailers for all your online Christmas shopping
3 Miriam Lord: All test and no trace makes Jack, and heaven knows who else, a very ill boy
4 Varadkar says ‘dumping’ contact tracing problem on GPs ‘unfair’
5 Gym owner plans to defy restrictions and open
Real news has value SUBSCRIBE