Donegal council carries out safety review of piers and harbours 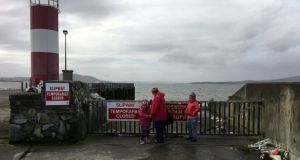 The slipway at Buncrana where the tragedy occurred. Photograph: Peter Murtagh/The Irish Times

Donegal County Council is to carry out a safety review of piers and harbours in the county.

Last March, two adults and three children died when their car slipped down Buncrana pier and into Lough Swilly.

A marine engineering firm has been appointed to carry out the review of around 100 piers and harbours in Donegal with work due to commence shortly.

A statement from the local authority said any remedial works recommended will commence in the second quarter of 2017.

In August the council announced a an in-depth study of pier safety would take place across the county following the deaths of Sean McGrotty (49), his sons Mark (12) and Evan (8), his mother-in-law Ruth Daniels and Ms Daniels’ daughter Jodie Lee Daniels (14).

Mr McGrotty’s four-month-old baby daughter Rionaghac-Ann was saved after she brought to safety from the vehicle with the help of a bystander who entered the water to help.

The council completed an internal investigation into the incident in August and said it would be commissioning a wider study of piers across the county.

At that time the council said it had carried out an initial preliminary review.

In May, the council said they were examining the “facts surrounding this unfortunate tragedy” at Buncrana.

It is understood a build-up of algae on the pier may have made the surface slippery which may have been a contributing factor in the tragedy.