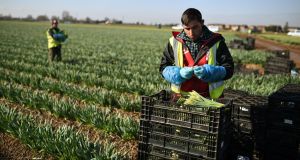 Flowerpickers near Holbeach, England. “...as if globalisation, outsourcing and automation would all magically disappear if only there were fewer Romanians picking strawberries in Lincolnshire.” Photograph: Getty Images

Whoever leaked the British government’s blueprint for post-Brexit immigration has done us all a great service. True, we don’t know what motive led the document to be handed to the Guardian. It could have been done by an enthusiast for the plan, keen to ensure that there’s no backsliding and that ministers stand firm. Or, more likely, the leaker was appalled by a document that sees migrants as a menace to be repelled – and hoped public disclosure might generate enough opposition to kill the plan off.

Either way, and regardless of where this leak sits in the continuing internal government battle between those obsessed with migration – a group that includes the prime minister – and those who seek to prevent Brexit from wrecking the UK economy, its publication is a service.

Along with the Trump administration’s announcement on Tuesday rescinding Daca, the Deferred Action for Childhood Arrivals programme – which allows undocumented migrants who came to the US as children (the so-called Dreamers) – protection against deportation, this document shines a bright, clarifying light on what opposition to immigration really means when translated from slogans into policy.

Plenty of experts have already condemned the Home Office text for its myriad impracticalities and contradictions. To take just one, the government says it wants “no cliff-edge” exit from the single market and customs union on the day we leave, in March 2019. But this plan would end the free movement of people, which is a central plank of the single market. So, were this plan to be adopted, the UK would be out of the single market on day one, jumping right off that cliff edge.

There are plenty more contradictions in that vein in the detail of the document. But it’s the overall tone that’s most striking. Each measure is clearly designed with the same objective: to deter would-be migrants from coming to Britain by making that process as difficult and unappealing as possible.

So now you would need to show the right papers, have your fingerprints taken, register after a certain period, accept that your rights to “ family reunion ” have shrunk, and face the fact that in most cases you’ll be allowed to stay for only two years before being kicked out. (Seasoned May watchers say this seems to be constructed to satisfy a long-held May goal: breaking the link between migration and settlement, so that even if newcomers are temporarily allowed into the country they are stripped of any assumption that they might be able to stay.)

The fingerprints requirement is especially telling. It implies that there is something vaguely criminal about being a migrant. Note how the US attorney general, Jeff Sessions, when he announced the proposed scrapping of Daca on Tuesday, made a similar connection, suggesting that allowing the 800,000 Dreamers to remain in the country had “put our nation at risk of crime, violence and even terrorism” – even though that is wholly untrue (Dreamers lose all protection if they commit a crime, and can be deported instantly).

Both Trump’s move and the UK Home Office document make the same two mistakes. First, they rest on a common delusion: that, somehow, it is the presence of migrants that is chiefly responsible for society’s current woes – as if globalisation, outsourcing and automation would all magically disappear if only there were fewer Romanians picking strawberries in Lincolnshire. This is the myth that Theresa May and Donald Trump are both selling, and it’s a con.

As Barack Obama put it in a rare statement , issued in defence of the Dreamers: “Kicking them out won’t lower the unemployment rate, or lighten anyone’s taxes, or raise anybody’s wages.” Or, in the rather more direct words of one Twitter commentator : “Deporting a great kid because he’s brown isn’t going to bring your job at the steel mill back.”

But there is another folly at work. Doesn’t the author of that Home Office document realise that, in setting out to make Britain as unattractive as possible to potential newcomers – a mission already accelerated by Brexit’s devaluation of the pound – the government will also make the country less attractive to everyone else, including those born and raised here?

It’s not just the harshness of tone, making Britain a country that slams the door in the face of the outside world. It’s more practical than that. Farmers warn that they need EU migrants to harvest their crops. Employers have already condemned the leaked plan, because they fear that it will not only turn them into unofficial immigration inspectors, but also deprive them of people they need, who often do jobs native-born Brits won’t do. Economists issue the same warning.

Most telling are the pleas from the NHS, from care homes and from schools. If we keep out the migrants this Home Office plan aims to keep out, we will be depriving ourselves of nurses, care workers and teaching assistants. That’s the verdict of those bleeding heart liberals at the Institute of Directors.

It’s a kind of collective lunacy. We’re becoming the gardener who, infuriated by the presence of unplanned wildflowers on the edges of his lawn, decides to drench the entire area in weedkiller. He gets rid of the wildflowers all right – but he’s left with a patch of barren, scorched earth where nothing will ever grow.