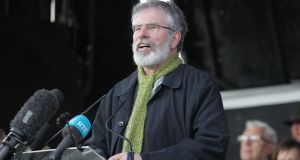 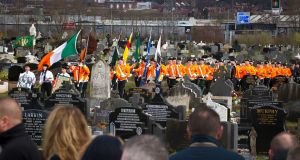 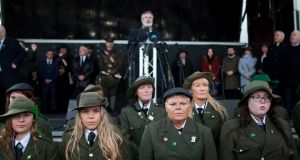 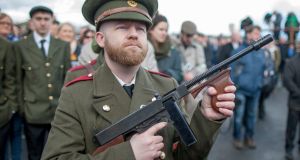 A man dressed in period uniform of the 1916 Easter Rising with a replica Tommy gun at the Sinn Féin 1916 commemoration. Photograph: Liam McBurney/PA Wire

Divisions must be healed and sectarianism ended to realise the vision of 1916, Sinn Féin president Gerry Adams said at the Easter Rising centenary parade in west Belfast on Sunday.

Thousands marched and several thousand more lined the Falls Road for the parade to the republican plot in Milltown Cemetery.

Mr Adams and senior republicans such as Bobby Storey, Brendan “Bik” McFarlane and Padraic Wilson marched towards the head of the parade.

Hundreds appeared in 1916 replica uniform with many more dressed in black berets and dark clothes. Others dressed in modern-day Provisional IRA garb. A number of the marchers bore rifles and handguns from the period.

There were posters of the 1916 Proclamation signatories along the route. Many of the marchers carried tricolours while children on the Falls Road also waved green, white and orange flags.

There were also replica 1918 general election posters declaring, “Vote for Sinn Féin and show the world Ireland is not part of England” and “We serve neither King nor Kaiser but Ireland - Vote Sinn Féin”.

Mr Adams said much work remained to be done to achieve the ambitions of the 1916 leaders.

He said that for the first time through the peace process and the 1998 Belfast Agreement “the roots of conflict were addressed and a democratic route to Irish unity opened up”.

“But there is much yet to be done. Hurts must be healed, divisions ended and the scourge of sectarianism must be tackled,” he said.

“There is more to be done right across Ireland. While there have been improvements since it was first established, the Southern State is not the Republic proclaimed in 1916.

“Current efforts by the Dublin establishment to pretend that it is are an insult to the men and women of 1916,” he added.

Mr Adams said there were those who argued that honouring the 1916 leaders might retrospectively justify violence.

“A united Ireland means the unity of the people of this island, including those who see themselves as British,” said Mr Adams.

“That is why Irish governments must pursue every avenue to promote all-Ireland co-operation and to build relationships between all our people.

“This must include genuine efforts to outreach to the unionists on the basis of equality.”

Mr Adams said after the May 5th Assembly elections Sinn Féin wanted “to emerge with a stronger mandate that will allow us to continue with our work to deliver a future of equals, in a society of equals for all our citizens”.