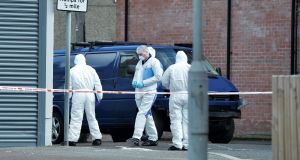 There are thin lines between life and death. Last week, a 52-year-old prison officer, a married father of three, was badly injured after a car bomb exploded under his van shortly after he left his home to drive to work.

He survived because the bomb had fallen off moments before as he had driven over a speed bump.

Yesterday, Police Service of Northern Ireland Assistant Chief Constable Will Kerr became the second senior police officer in a week to warn that dissident Republicans are bidding to cause death, or injury, before the 1916 Easter Rising commemorations.

Kerr described the bomb as “a significant device”. However, he would not comment on reports that it contained the explosive Semtex.

The dissident group that has claimed the IRA title said it was behind the attack and threatened more.

Describing the scale of the threat now posed by dissidents, a PSNI source said, “It’s at the upper end of severe, touching through the ceiling of severe.”

Kerr says the PSNI is stopping three or four planned attacks for every one that gets through. Co-operation with the British security service, MI5, and An Garda Síochána is “very effective”.

“Every month the guards do something that saves lives in the North,” he says, referring to arms finds, arrests and intelligence gathering that has often stopped dissidents in their tracks.

So, how many are involved? Several hundred “active”, says Kerr, counting those now using the titles IRA, Óglaigh na hÉireann and Continuity IRA.

Some, however, “have very significant terrorist experience”.

While these dissident groups are dangerous, their activity “is not on the scale [or at] the pace of the past, and it won’t return to that”, Kerr says.

He says the dissidents had “no strategy” and “no rational objectives” and likened them to “playground bullies in a school where everyone else has moved on”.

This is not to dismiss the threat, not to suggest that there is a perfect security or intelligence picture or answer, because the senior police officer knows the ability of these organisations to get under the radar.

They have killed police officers, soldiers and a prison officer in a gun attack as he drove to work in 2012.

However, more information and more help is needed from within the republican community. The PSNI is trying to get a message through that “intelligence” is not a dirty word, that providing information that prevents attacks is not “touting”.

There is still a fear in republican communities, a clear memory of what happened to “informers”, their bodies dumped on lonely roads after interrogation and execution.

For all of the political and policing change since the ceasefires and the Belfast Agreement, there is still that fear.

But those groups must know that continuing violence is not going to change the big political agreements.

Gerry Adams and Martin McGuinness have said that they are willing to talk. However, those who disagreed are not going to be persuaded by them to stop. It will take a bigger effort involving a wider group of people with political and community clout, but is there any appetite for such talks?

“Even under the warped arguments of the dissidents, conditions for armed struggle, as they would call it, don’t exist,” says Alex Attwood of the SDLP.

“They should recognise that. Irish democracy faced down terror before and does so now.”

The dissidents are planning more attacks and, out of our vision, there is this constant police and intelligence effort to stop them.

Much is interrupted, but not everything can be stopped. At some point there will need to be some talking.

Brian Rowan is a commentator on security issues