Direct provision is ‘a generation in a type of cage’

‘Blessings’ Moyo, who lives in Salthill, on asylum process and taking part in Exhibit B 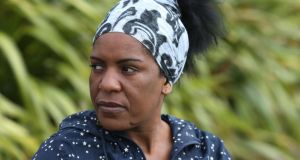 Siphathisiwe “Blessings” Moyo has missed her sleep over the past few weeks while volunteering with the Galway International Arts Festival.

That’s little to do with the intoxicating atmosphere enveloping the city and much to do with a confluence of events extending from Dublin and Brussels to the Mediterranean – and to her own situation in direct provision accommodation in Salthill.

Moyo took part in the Exhibit B installation by South African artist and playwright Brett Bailey as part of this year’s festival.

In his controversial critique of racism, actors portrayed real victims of colonisation and discrimination.

They included Saartjie “Sarah” Baartman – known as the Hottentot Venus – who was exhibited in a form of human freak show in the 19th century; the Herero and Nama victims of genocide in German South West Africa; and the treatment of asylum seekers and deportees today.

Moyo’s task was to control access to the exhibition, with audience members initially ushered into a “cage” to wait for their entry number.

She regularly had to comfort people who were overwhelmed: some cried.

“When I heard more about the show’s theme, I felt it was saying something about my situation, though in a different way.

“The number cards I was asked to give out were a reminder to me that we asylum seekers are no more than numbers too.”

Moyo left Zimbabwe over seven years ago with two children, now aged 17 and 14.

Another child was born in Ireland: four-year-old Alex, who starts school in September.

She has lived in direct provision in Salthill since she arrived and her case is on appeal.

She took part in a Government working group on reforming the asylum system, and gave testimony on the impact of direct provision and not being allowed to work.

The report of the group, chaired by retired High Court judge Mr Justice Bryan McMahon, was published just a fortnight before the arts festival.

It advised that more than 3,000 people in the system for five years or more should be “fast-tracked” to residency and that new asylum seekers should receive a decision on their application within a year and be able to work after nine months.

While Minister of State for Justice Aodhán Ó Ríordáin said there was a “moral obligation to move from the publication to implementation”, Minister for Justice Frances Fitzgerald responded by setting up a task force.

The move was described by Nasc, the Irish Immigrant Support Centre, as an “absolute betrayal of the trust of the thousands of asylum seekers who put their faith in this process and actively engaged with it”.

Earlier this week, Ms Fitzgerald said Ireland would take 600 of up to 40,000 people said by the EU to be in “clear need of international protection” after crossing from north Africa to Italy and Greece.

This is in addition to a commitment to resettle 520 refugees from Syria.

“What will happen when these people are placed in direct provision here? Will they have to wait as long as some of us?” Moyo asks.

“Most of the time when people ask me about direct provision, I don’t talk much as I feel people would not understand what it is like,” she says.

“Those who don’t understand think that we are ungrateful for being given shelter and food.”

Her eldest child has just sat the Leaving Certificate. Without full status, she will not be able to study at third level.

The reality of this is “just beginning to hit”, her mother says.

Listed as a cast member in Bailey’s Exhibit B programme, Moyo was one actor who could not be paid. The artist invited her to travel with Exhibit B to South Korea but, she says, she had to refuse as she has no papers.

Yet when she contributed to the McMahon working group, it was “in good faith” that her situation, and that of many like her, would change.

“When people are escaping conflicts and other bad situations in their own countries, the one thing that others can do is to empower them,” she says.

“They will always think of returning home one day and that empowerment can allow them to do that – and perhaps help to effect change in a way that handing out aid cannot do,”she says.

“Yes, let us have respect for borders and rules, but let us also ask what we really mean by human rights,”she says.

“And what we are doing to a generation of young people who are being raised without status in a type of cage?

“Otherwise, just like people who suffered in the Magdalene Laundries, we could have the children of direct provision being the victims of an Exhibit C.”