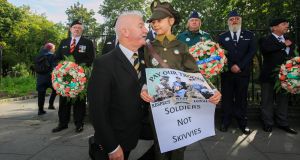 Retired Defence Force veterans are planning to mount a highly visible public campaign in which politicians will be targeted over what the retirees see as a lack of respect being shown to serving Defence Force members and their families.

According to retired Regimental Sgt Maj Noel O’Callaghan, a leading member of a close-knit group steering the campaign, 1,760 Defence Force members are on family income supplement – a fact seen as a collective humiliation of military personnel and their families.

The Defence Force establishment is supposed to be 9,500 personnel across the Army, the Air Corps and the Naval Service. However, at present it stands at some 8,800, many of whom, particularly the rank-and-file members, are struggling financially.

Depletions have opened holes in all ranks, including skilled cohorts, such as pilots and aircraft technicians, and further up the command structure, as well as among mechanics and communications officers in the Naval Service, according to sources.

The Department of Defence is seen by campaign members as treating the Defence Forces with a degree of contempt. Uniquely in terms of the public sector, the head of the Defence Forces, the Chief of Staff, is not his own “accounting officer” which means that, even when a budget has been agreed for the Defence Forces, he cannot spend within the agreed parameters without reference back to the department.

The actual accounting officer for the Defence Forces, the person with responsibility for recruitment and retention policies, is not the Chief of Staff but the secretary general of the department.

The need for departmental approval for almost everything is seen as being insisted upon to an absurd degree.

As another of those supporting the campaign, retired Brig Gen Ger Aherne, puts it: “If a local community group came to me to ask could they borrow a tent for a one-day parish event and I had a spare one, I would still have to ask some junior official in the department if it was okay to lend it. Escalate that situation to a critical level of command and control and you can see there’s something wrong.”

The campaign aimed at politicians will be rolled out for next May’s local government elections, and also should there be a general election in 2019.

Minister of State with responsibility for Defence Paul Kehoe (constitutionally, the full minister is Taoiseach Leo Varadkar) got a foretaste of the campaign last Saturday when retired Defence Force personnel paraded outside his constituency office in Wexford.

Service defence force personnel are prohibited for strike action, or anything of a similar nature, and also from political involvement. Retired members retain a reluctance to stage political displays, preferring the parade option instead.

The campaign will be overseen by five retirees, including Sgt Maj O’Callaghan, and, later this month, they plan to meet and agree the message which they hope local activists in each of the general election constituencies will deliver to candidates.

The campaign “will target the message to individual candidates who are not cognisant of the needs of the Defence Forces”, says Brig Gen Aherne, adding the veterans want “the military family to vote strategically”.

Attention is likely to focus on sitting TDs connected to the current Government.

“We would encourage veterans to parade in front of every Fine Gael TD’s constituency office, every Independent Alliance TD and the three individual TDs – Michael Lowry, Sean Canney and Michael Harty – supporting the Government. We are looking for respect and loyalty for the Defence Forces,” says Brig Gen Aherne.

He cites several measures needed urgently to address the crisis.

There should be a commission to address the relationship between the department and the Defence Forces; there should be a reactivation of the Council of Defence, a formal body in which the department and senior officers are supposed to meet but which, according to Brig Gen Aherne “has not met for years because it is a statutory body and the department doesn’t want anything on the record”; the implementation of the 2015 White Paper on Defence, and immediate discussions on the implementation of the European Union working time directive.

Brig Gen Aherne says also that the operational implications for the Defence Forces in relation to anything that Brexit might throw up have yet to be fully considered.

“Right now, with one brigade headquartered in Cork and the other in Rathmines, it is from the latter that the Border, from Donegal to Louth, is overseen. During the [economically] tough times in the 1950s and 1960s, we never collapsed the brigade architecture of the Defence Forces which was allowed expand rapidly when the crisis hit in 1969.

“When the Western Brigade, of which I was the last General Officer Commanding was collapsed – by ministerial order – responsibility for the entire Border was transferred to the brigade headquarters in Rathmines.”