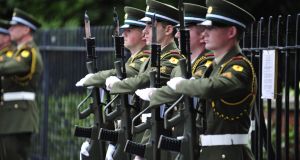 A support group for soldiers had previously said the Defence Forces has not been screening military personnel properly before prescribing the controversial drug Lariam. Photograph: Aidan Crawley/The Irish Times

Gerry Rooney, head of a representative group for the defence forces has said the Department of Defence should offer an alternative to the anti-malaria drug Lariam for Irish soldiers serving abroad.

The Permanent Defence Force Other Ranks Representative Association (PDFORRA) maintains that Ireland is not following UN guidelines which say an alternative drug should be provided for personnel with a sensitivity to Lariam.

Minister of State for Defence Paul Kehoe told the Dáil last week the choice of malaria medication was a matter for the Defence Forces, and the medical corps had advised him that “Lariam is the most suitable drug” for personnel serving overseas.

This means Defence Forces personnel serving in sub-Saharan Africa will continue to receive the anti-malaria drug Lariam, despite the fact it has been withdrawn from the Irish market.

A support group for soldiers had previously said the Defence Forces has not been screening military personnel properly before prescribing the controversial drug Lariam, despite the Government’s claims to the contrary.

The Action Lariam group said new cases of serving and former personnel suffering ill effects after taking the drug, up to and including suicidal ideation, were continuing to emerge.

It believes the withdrawal of the drug from public sale in Ireland coupled with recent developments in the British military represent an acknowledgement that the drug is not suitable.

It wants the Defence Forces to stop using the drug, to acknowledge the suffering of the affected personnel and to treat them .

Mr Rooney told RTE’s Morning Ireland that the working group set up by the government to investigate the issue has not been in touch with the association.

“We have had no contact with the working group. We asked to see the report, but they won’t give it to us.

“We are asking the Minister to explain this position.”

He added that many personnel tended to downplay their concern about Lariam because they want to go overseas.

“Where they can take it, they do so, they would rather not, but this should be about choice.”

He pointed out that personnel going overseas for shorter tours can take alternative drugs.

“We are in discussion with the Department about the introduction of alternative drugs, but these discussion have been slow to date.”

Mr Rooney said that there will be a significant number of court cases in the future as 51 former soldiers are taking legal action over the illnesses they have suffered as a result of taking Lariam.

A former member of the Defence Forces Anthony Moore, who has suffered side effects from taking Lariam, told Morning Ireland that when the symptoms first appeared he thought it was because of the heat in Liberia where he was serving.

Mr Moore, who is a member of the Action Lariam Group added: “When there was swelling of my hands, I thought it was the heat. The lack of sleep I put down to sleeping next to a 24 hour generator. It wasn’t until I came home that I realised it wasn’t the heat.

“I had joint aches, pins and needles, pains. The army doctors didn’t know what the pain was from. For two years they treated me with different tablets, I was finally sent to St James Hospital and from there to Beaumont, I was treated for different things. But at no point in time did anyone say it was Lariam.

“No one told us about the side effects. Before we went away there was a fitness test, an eye test, heart check, but at no time were we told there were side effects. There at least 11 of us who should never have been given Lariam.

“Had we been informed most of the lads would not have taken it. We should never have been given that drug.”