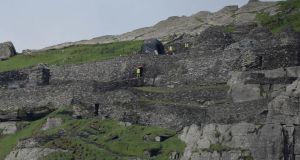 The return of crews filming the new Star Wars film to the Skellig Michael Unesco World Heritage Site off the Co Kerry coast next month will be hugely beneficial for tourism in the area, Minister of State Jimmy Deenihan has said.

Mr Deenihan, a Kerry TD and former minister for arts who was involved in bringing the film to the island last year, has defended the move, which has been criticised by heritage group An Taisce.

He strongly defended the decision to allow Disney Lucasfilm on to the rock to film last year. He said that the return of the film crew next month will further enhance its appeal as a must-see visitor attraction for tourists coming to Ireland.

“I think that this will expose Skellig Rock to the world and I think it will bring thousands of tourists over time to Skellig Rock, weather permitting,” Mr Deenihan said. “Both Star War films are going to show what a gem Skellig Rock is to the world.

Mr Deenihan spoke to The Irish Times at Derrynane in south Kerry, where he delivered the closing address at the Daniel O’Connell Summer School.

Mr Deenihan stressed that every measure had been taken last year to ensure there was no damage to the rock during filming, and that it had proven successful.

“The filming there in 2014 was obviously handled very sensitively and there was no damage at all recorded afterwards,” he said. “And I expect this year it will be handled with the same sensitivity and care by everyone involved in the project.”

Mr Deenihan acknowledged that some staff in the Office of Public Works may have had reservations about allowing a film crew onto the rock, with its historic remains of 8th-century monastic settlement.

However, he reiterated that he saw no problem once no damage or disturbance was caused.

An Taisce has asked Minister for Arts Heather Humphreys to outline why she is giving consent to filming of the JJ Abrams directed film, called Star Wars: Episode VII – The Force Awakens, on the world heritage site.

In a letter to Ms Humphreys, An Taisce environment and heritage officer Ian Lumley said that one of the “greatest threats” from the filming on the rock, 12km offshore, involves “the risk of accidentally bringing rats to the island with all the cargoes, including extensive food and catering”.