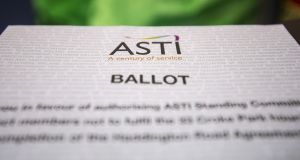 ASTI is balloting its 17,000 members on the issue of pay for newly qualified teachers, as well as voting on withdrawing from carrying out supervision and substitution duties

The deal to end lower salaries for recently recruited teachers will significantly widen the pay gap between many teachers – some working side-by-side in the same schools.

The Government yesterday reached agreement with the Teachers’ Union of Ireland (TUI) and Irish National Teachers’ Organisation (INTO) which will see their members – who were taken on after February 2012 – receive an increase of €2,000 a year, in phases, in 2017 and 2018.

The Department of Education said the deal could be worth an extra €135,000 over a teacher’s full career.

They will also forfeit incremental pay rises as they fall due this year, as well as an €800 payment for supervision and substitution duties.

With ASTI members having rejected the Lansdowne Road agreement, the union are now firmly on a collision course with the Fine Gael-led Government, which could result in the closure of schools as early as next month.

ASTI is balloting its 17,000 members on the issue of pay for newly qualified teachers, as well as voting on withdrawing from carrying out supervision and substitution duties.

The ballots will be counted on October 14th. If they are carried, the union would have to give only one week’s notice before any industrial action could take place.

The €2,000 pay boost for recently recruited TUI and INTO members will cost about €20 million and is conditional, according to the Department of Education, on teachers introducing some reform measures.

These reforms, in the main, do not appear to involve teachers carrying out any additional duties. The planned reforms include the establishment of leadership teams in schools with appropriately defined and shared responsibilities for areas such as curriculum and learning, student support and wellbeing, school improvement and leadership and development of staff teams.

They will also see the progressive introduction of open recruitment to the position of deputy principal at primary level, initially in larger schools, and the phasing out of seniority/length of service as a standalone criterion for selection for posts of responsibility.

Minister for Education Richard Bruton said it was “great news for new teachers” and showed what could be done through dialogue and within the Lansdowne Road agreement.

“When this restoration and other increases payable under the Lansdowne Road agreement are factored in, there will be a 15 per cent increase in the starting salary of teachers between 31st August 2016 and 1st January 2018 (€31,009 to €35,602).”

The new deal also puts pressure on the Government to address the two-tier issue for other public service groups, such as recently recruited gardaí who also lost out on allowances.