Deal results in withdrawal of strike threat at ESB

Agreement reached after negotiations at the Labour Relations Commission 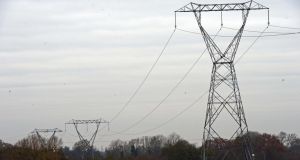 The ESB has welcomed the withdrawal of notice of a strike, which it said “would have had extremely damaging consequences for electricity consumers, businesses, the economy and the company”. Photograph: Eric Luke/The Irish Times

A deal has been struck between ESB management and unions resulting in the withdrawal of threatened strike action.

Agreement was reached after negotiations at the Labour Relations Commission today.

The ESB welcomed the withdrawal of notice of a strike, which it said “would have had extremely damaging consequences for electricity consumers, businesses, the economy and the company”.

Resolution of the issue would protect the ESB’s financial strength, the company added in a statement - “there will be no additional liabilities on ESB’s balance sheet”.

It added: “The agreement recognises ESB’s existing obligations under the terms of the [defined benefit pension] scheme and there will be no change to the accounting treatment of the scheme in the company’s financial statements as a result.”

A statement on behalf of the unions involved in the negotiations said staff had been subjected to unfair public criticism during the dispute.

“The ESB workers have been publicly vilified for nothing more than protecting themselves and their families against an attempted destruction of their bought and paid for pension rights,” it said.

The statement praised the “unity and determination” of the workers, their representatives and the wider trade union movement.

If the strike had gone ahead, all power generated by the ESB would have been off the grid when the action kicked in.

Minister for Energy Pat Rabbitte also responded to the development. “I welcome the resolution of the pensions dispute at the ESB and offer my thanks and the appreciation of the Government to the LRC and Mr Kevin Foley for their patient endeavour.

“The settlement is unqualified good news at this critical juncture of the year and of the countries economic recovery.

“Unions and management deserve credit for ending the uncertainty that threatened to do disproportionate damage to the countries best interests.”

Earlier, he said he had been contacted directly by multinationals who warned him that the fourth quarter was their best in the last five years and “any disruption no matter how short lived would be very damaging”, he told RTÉ’s The Week in Politics.

On Friday, ESB unions said they would mount an all out dispute from the morning of Monday, December 16th involving a “full withdrawal of labour and the placing of pickets”.

A statement issued by Union Disputes Committee said all unionised staff who are members of the defined benefit pension scheme would take part.

“Due to ESB’s false accounting and statement of intent regarding the staff’s Defined Benefit pension scheme a strong mandate for industrial action has been received from a ballot of the staff affected,” the statement said.

The disagreement centred on claims by union members that the company’s changes to its pension plan means workers are carrying a risk of some €1.7 billion.