Dara Murphy: his Dáil record while holding down job in Europe at same time 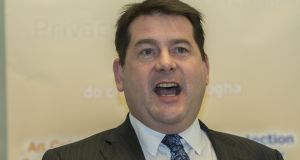 Cork North Central TD Dara Murphy: his attendance at the Dáil on sitting days during 2018 and 2019 was the worst of any TD. Photograph: Brenda Fitzsimons

On May 19, 2018, the Cork North Central TD Dara Murphy announced he would be standing down from the Dáil before the next general election.

Taoiseach Leo Varadkar issued a statement that noted Murphy would be continuing as director of elections for the European People’s Party, the centre-right political group to which Fine Gael is aligned in Europe.

“So while Dara might be leaving the Dáil, he is certainly not leaving political life or Fine Gael,” said Varadkar. “I look forward to working with him closely during the next phase of his career.”

The next phase of his career has been in full flow since then. However,  leaving the Dáil bit has been a bit more complicated.

Murphy has held down what has been a full-time job with the EPP for most of the past two years. He has a company, which he has declared in his Dáil returns, which administers the fees he received.

Defending Murphy on Thursday, Varadkar said: “His main job has been a European job in the past two years, and he’s done that extremely well.”

But it’s a job with the EPP, which is a political grouping. It has nothing to do with the Dáil or indeed the EU parliament. Varadkar also claimed Murphy was representing his constituency locally and being present for key votes.

But the record shows Murphy’s parliamentary input has been reduced to near zero since the end of 2017, after he took up the role with the EPP. As his colleagues say, Murphy has been semi-detached since then, with a frenetic schedule in Brussels and throughout Europe, especially in the lead-in to this year’s European elections.

Of the thousands of tweets he has posted in the past two years, only about 20 relate to his home constituency.

However, he has still claimed his full salary of €94,500, as well as his full allowance of €51,600 per annum. That includes a travel and accommodation allowance (TAA). As he is Cork-based TD he is in Band 8 which entitles him to an annual TAA of E31,365. To receive the full amount, he needs to record his attendance on the campus at least 120 times in a calendar year.

Parliamentary questions are important not only for spokespeople seeking information for their brief, but also for local TDs who want to make representations

There is a custom that former holders of high office such as Enda Kenny and Michael Noonan are not required to attend the Dáil regularly. Yet both have been present twice as often as Murphy.

He makes up the required total of 120 days by fobbing in on non-sitting days, including 12 days during August this year. Most of those days are Mondays, Thursdays, or Fridays, which coincide with him flying out to, or returning from, his job in Brussels.

By comparing the log of his attendance in Leinster House with the datelines on his Twitter feed, there have been at least 10 days in the past two years where he has logged in before departing for, or after arriving from, another EU state.

It shows that on five of those dates, he has been also in Brussels that day. The other locations have been Warsaw, Poland; Malta; Sofia, Bulgaria, Prague, the Czech Republic and Paris.

Despite fobbing in so frequently, Murphy has not spoken in the Dáil since December 7th, 2017, when he participated in a debate on European defence.

He did speak at a meeting of the Oireachtas Public Petitions Committee in October 2018, about the funding of the National Symphony Orchestra. It was his only attendance at the committee, of which he is a member, during 2018 and 2019.

He has asked a total of five parliamentary questions in 2019 and only two in 2018, according to the Oireachtas website.

Parliamentary questions are important not only for spokespeople seeking information for their brief, but also for local TDs who want to make representations, or elicit information, on behalf of constituents. Asking two in the course of an entire year suggests almost total disengagement.

It is understood Murphy has an arrangement with the Government chief whip Seán Kyne to be present for the Dáil’s weekly voting day on Thursday. He has not been present for all of those voted days. He voted on 15 days in 2019, and a total of 18 days in 2018. The records show that he has voted on about 32 per cent of the 470 or so votes taken since mid-2017.