Dáil divided on response to violence on Israeli-Gaza border 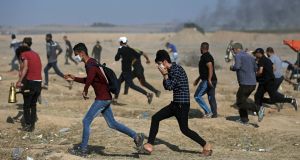 Palestinian protesters run for cover from teargas fired by Israeli troops during a protest at the Gaza Strip’s border with Israel on Tuesday. Photograph: Khalil Hamra/PA

Differences emerged at Cabinet yesterday over how Ireland should respond to the latest outbreak of violence on the Israeli-Gaza border, with a demand heard for the Government to recognise Palestinian statehood within weeks.

Tánaiste and Minister for Foreign Affairs Simon Coveney briefed his ministerial colleagues on his response to the violence, including his summoning of the Israeli ambassador to his department.

Mr Coveney expressed “shock and dismay” at the 59 deaths and further injuries on the Gaza Strip and told Israeli ambassador to Ireland Zeev Boker of Irish demands for an independent international investigation.

A later Cabinet discussion saw Mr Coveney ask a colleague not to “misrepresent” his views on the issue, according to sources.

At the Cabinet meeting, the Independent Alliance Minister of State for Disability Issues Finian McGrath asked Mr Coveney to undertake a six-week plan that would culminate in the Government recognising the Palestinian state.

The Dublin Bay North TD said that, after a week or two in which tensions could calm down, the Government should work with the United Nations and the European Union to de-escalate the situation.

At the end of this process, he said, Ireland should then proceed to unilaterally recognise Palestinian statehood without waiting for other countries to do so.

Mr McGrath said such a commitment was contained in the Programme for Government, although Mr Coveney pointed out that the document actually said this would be done when an overall Israeli-Palestinian peace settlement had been reached.

This says Ireland will recognise Palestinian statehood once there is a “lasting settlement” of the conflict with Israel.

It says: “We will continue to play a role in advancing a stronger role for the EU in the Middle East peace process, having regard to the stalled nature of the process at present, and honour our commitment to recognise the state of Palestine as part of a lasting settlement of the conflict.”

One source who witnessed the Cabinet exchange said: “Simon is usually calm, but he was a bit rattier than usual.”

Mr Coveney was also said to have asked Mr McGrath not to “misrepresent” his views, although it is not clear what he was referring to.

The Government will not be expelling the ambassador. In recent decades Ireland has never expelled an ambassador

The violence was also raised in the Dáil with both Mr Coveney and Taoiseach Leo Varadkar, who insisted that that Ireland would not expel Mr Boker.

Mr Varadkar said the Government condemned the violence and disproportionate use of force.

“Live ammunition is not a tool to be used for crowd control,” he said.

“The Government will not be expelling the ambassador. In recent decades Ireland has never expelled an ambassador.”

He said this would lead to a reprisal expulsion of the Irish ambassador to Israel and “there would be no engagement”.

Mr Varadkar also told the Dáil the Government had committed to recognising the state of Palestine as part of a two-state solution to the Middle East conflict, but that had not come about.

“Any country is entitled to defend its border but the use of force must be proportionate,” he said.

Ireland also “profoundly” disagrees with the decision of the United States to move its embassy to Jerusalem.

“Ireland’s embassy will remain in Tel Aviv,” he said.

“If Israel continues to act with impunity, we will continue to see the carnage we witnessed on our televisions yesterday and are likely to continue to see in the weeks ahead. It is time for countries to make a stand,” Mr Doherty said.

He said Ireland had expelled a Russian diplomat in the wake of a nerve agent attack on a former Russian intelligence officer, Sergei Skripal, and his daughter Yulia in the English city of Salisbury.

“The Government made a stand in the case of a Russian diplomat, so what will it take for the Government to say ‘No more’?

“What will it take for this proud country to take a stand, as an international independent country, by telling the Israeli ambassador it is time to pack his bags?”