Conor Pope took to the cycle lanes of Dublin to see how obedient the city cyclists are and what, if any, difference the new regulations will mean to them? Conor Pope reports. 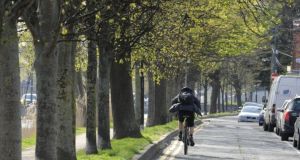 Notices unpaid after 28 days will be raised to €60, which can be followed by a court summons if still unpaid.

Supt Tom Murphy said that point of the new legislation was “to ensure safety for all road users, including cyclists.”

“It is a national scandal that Gardaí are not ticketing cars for parking in cycle lanes.” Mike McKillen, the chair of the Irish Cycling Advocacy Network, said:

Gardaí issued 144 penalty point notices to drivers in 2014 for parking in cycle tracks, though Mr McKillen says that the issue is substantially more prevalent.

Supt John Ferris said that many of the cases raised involve delivery vehicles and there was an “economic requirement” to this use of cycle lanes.

Short-term parking is allowed on cycle lanes up to a half hour, excluding lanes marked with a continuous white line.

Gardaí will be working to promote road safety over the August Bank Holiday. The weekend has historically been one of the most dangerous weekends on Irish roads, with 12 fatalities and 27 people seriously injured since 2010.