Court rejects bid by O’Donnells for injunction to halt repossession

The High Court has dismissed an application for an injunction by the O’Donnell family to halt the repossession of their home in Killiney. The receiver involved has now served a trespass order against Brian O’Donnell and his wife Mary Patricia. 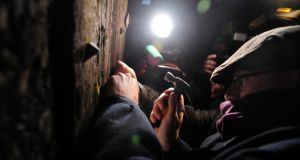 A trespass notice being served on the home of the O’Donnell family in Killiney on Tuesday evening. Photograph: Aidan Crawley 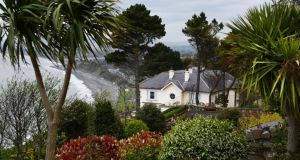 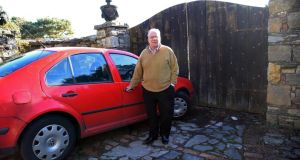 John Martin, of the Land League, at the entrance to Gorse Hill, the home of the O’Donnell family, at the Vico Road. Photograph: Eric Luke / The Irish Times. 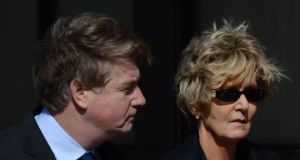 The High Court has dismissed an application for an injunction by the O’Donnell family to halt the repossession of their home in Killiney.

The receiver involved in the repossession proceedings has now served a trespass order against Brian O’Donnell and his wife Mary Patricia.

He also rejected a claim by Mr O’Donnell’s son Blake that his parents had a right of residence, granted to them by their children.

“It is the receiver who is in control and it is not in the power of the plaintiffs [O’Donnell children] whether Mr and Mrs O’Donnell should reside there,” he said.

Receiver Tom Kavanagh had a right to vacant possession on foot of decisions by the High and Supreme Courts and the O’Donnell parents were not entitled to possession.

“This is a device for the purpose of frustrating decisions of this court and of the Supreme Court, ” he said.

The case was before the court after the four adult O’Donnell children – Blake, Blaise, Bruce and Alexandra – sought an injunction claiming the previous court orders were obtained on the basis of fraud and perjury by Bank of Ireland.

The bank obtained a €71.5 million judgment against their parents, Brian and Mary Patricia O’Donnell, over unpaid loans and part of the security for those loans was Gorse Hill.

On Monday the bank-appointed receiver Mr Kavanagh was due to take possession but, the court heard, there were reports Brian O’Donnell had barricaded himself in and invited support from anti-repossession group, the New Land League.

Cian Ferriter SC, for the bank, gave the court an update as to what was happening on the ground at Gorse Hill following a request from the judge on Tuesday.

Counsel said there had been a “disturbing dimension” in relation to the proceedings with Brian O’Donnell having invited in the self-styled Land League which says it is speaking on behalf of the solicitor as though he was “some unfortunate tenanted cottier who cannot speak for himself and has got them in as some sort of foot soldiers”.

Blake O’Donnell, who is also a solicitor and argued the case for an injunction, told the judge an affidavit filed by the receiver as to what had been happening seemed to be “a media review designed for a few quotes for the newspapers but there is nothing really of any substance in it”.

In rejecting the injunction application, Mr Justice McGovern said he had carefully considered matters and there was no bona fide issue to be tried.

He was satisfied the case made by the O’Donnell children had been fully dealt with in the High and Supreme Courts.

He rejected their claim a company, Vico Ltd, which the courts found owned Gorse Hill, was entitled to bring the injunction application in its own right because it had not been party to the previous cases.

This issue had been canvassed at the original High Court hearing and counsel for the O’Donnell children, Ross Maguire, had told the court then that he was not seeking to join Vico in the case, he said.

Both the High and Supreme Court had found Vico owned Gorse Hill and formed part of the security for the €71.5 million O’Donnell parents’ debt, he said.

The O’Donnell parents were directors of Vico from July to December 2012 and it was struck off the register of companies but restored to the register seven days after the Supreme Court decision rejecting the appeal against repossession of Gorse Hill, he said.

No satisifactory explanation was given as to why it took so long for Vico to make the claim it is now making.

Apart from the delay and the fact that it had already been adjudicated on, it also amounted to an abuse of process, he said.

He also rejected the O’Donnell childrens’ claim that the case should not have been brought by Bank of Ireland Private Banking, a wing of the bank which the judge said deals with high-net-worth individuals. It was clear the money was lent to the parents by Bank of Ireland and that point had also been raised with and dealt with in the previous court cases.

Mr Ferriter, for the bank, then asked the judge if Blake O’Donnell would phone his father and ask if he intended to stay in the house.

Mr O’Donnell said it was a matter for the bank to contact his father but the judge directed he phone his father and he would grant a brief adjournment for him to do so.

When the court resumed, Mr O’Donnell said his father told him he was “not a party to the proceedings” and if the receiver wants to enforce the order then he should serve papers on him.

When asked twice by the judge whether his parents were going to obstruct the receiver in taking possession, Mr O’Donnell said they did not accept the receiver had a right to do so.

After telling Mr O’Donnell the rule of law and court orders must be complied with, Mr O’Donnell said the judge’s decision would be appealed.

Mr Ferriter said in view of the “shocking approach” by Mr and Ms O’Donnell, his client was now making an application to serve notice on the couple of the bank’s intention to seek orders preventing them interfering with the receiver.

Mr Ferriter said there may be difficulties serving the couple as the post box had been removed from Gorse Hill and the only way to communicate with anyone inside the house was by intercom.

The judge granted Mr Ferriter permission to serve notice by email and by posting the papers on the gate of Gorse Hill. He said he would deal with the bank’s injunction application on Thursday.

Shortly after 6pm representatives of the receiver nailed a package of documents addressed to Brian and Mary Patricia O’Donnell to the gates of the couple’s home at Vico Road, Killiney.

A black minibus carrying three men arrived shortly after 6pm and they spent some time trying to contact the couple inside through an intercom system at the gate but got no response.

They then stuck the package of documents to the gate.