Council to remove carcass of large shark from Dollymount Strand

Remains of basking shark turns up on north Dublin beach 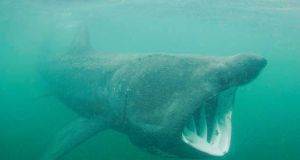 Dublin City Council says it plans to remove the decomposing carcass of a large basking shark from Dollymount Strand in north Dublin “as soon as practicably possible”.

The remains of the fish, which is more commonly found off Ireland’s south and west coasts, washed ashore earlier today.

The Irish Whale and Dolphin Group (IWDG) confirmed it had received a number of reports about the fish from locals.

A spokesman said the creature had previously been spotted floating in the River Liffey where it was wrongly identified as a whale.

Dublin City Council said plans were being made to remove the carcass.

“The council has been in contact with the IWDG and is making arrangements on how to best dispose of it at the first opportunity,” a spokesman said.

The basking shark or liabhán chor gréine (great fish of the sun) is the second-largest fish in the sea.

Once hunted to the point of extinction for the oil in their liver, Ireland’s basking shark population is thriving once again thanks to an EU-wide protection order.

Characterised by its large dorsal fin and docile surface swimming behaviour, the fish is now commonly spotted off the west and south west coasts during the summer months.