Olivia Kelly sums up the fall out and we hear from local residents who will be affected. 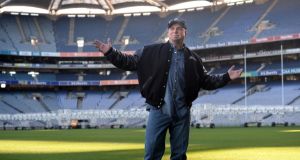 ‘I have faith that Dublin City Council will make the best decision for the people of Ireland. For us, it is five shows or none at all,’ Garth Brooks said in a statement.Photograph: Dara Mac Dónaill /The Irish Times

Dublin City Council has said it consistently expressed concern about the number of concerts proposed for Croke Park by the promoter of the five Garth Brooks events and it said the decision cannot be appealed.

In a lengthy statement this evening, the local authority outlined in detail the licensing process and meetings held with the promoter, Aiken Promotions, and the venue management, after the tickets had gone on sale in February.

The council said that as the licensing authority, it “must adhere to the procedures laid down in the attendant Planning Act and Regulations”.

“The decision to grant or refuse an event licence is made by senior management in DCC’s planning department, to whom those powers have been delegated by the chief executive.

“As with all major applications, decisions are not made lightly and are done so in consultation with other members of senior management.”

The council said it should be noted that event licence decisions made under the Planning & Development Acts “cannot be amended or appealed”.

Earlier, Minister for Tourism Leo Varadkar said the issues surrounding the cancelled concerts were a “blow to fans and visitors coming from abroad”.

However he said the decision on the licence was made by Dublin City Council and there was “no provision in law for it to be appealed or overturned other than by the courts”.

The way events unfolded were “clearly unsatisfactory from everyone’s point of view” and highlighted the need to review the major events licensing laws, he said.

Garth Brooks said last night that he would do all five concerts in Croke Park or none at all. The country singer said: “I have faith that Dublin City Council will make the best decision for the people of Ireland. For us, it is five shows or none at all.”

However Mr Varadkar said the “onus” was on the promoters to ensure that the other two concerts are rescheduled or relocated. “There were only supposed to be three concerts when the tour was first advertised and I see no reason why these should not now proceed,” he added. Residents have “legitimate concerns” he said.

Meanwihle Sinn Féin, the largest party in the council, has called on council chief executive Owen Keegan to intervene and reverse the decision not to allow all the concerts to go ahead.

Group leader, Councillor Séamus McGrattan said “the fans who bought tickets should not be the losers in this”.

“The whole process has been a mess. There has been a breakdown in communication and trust between the local community and Croke Park going back over a number of years....There are no winners but there are clearly losers,” he said.

He urged Mr Keegan to allow the concerts to go ahead “in the interests of the city”.

Mr Mulvey had chaired a mediation process between residents and Croke Park to try and resolve issues surrounding the application to hold five Garth Brooks concerts in the Stadium this month.

Speaking on RTÉ radio Mr Mulvey said the decision to seek five concerts was “misjudged and badly handled” and he said he was unable to reach agreement with the residents on a way forward.

However he said that something needed to be done immediately to save Ireland’s reputation.

“The city has lost, the country has lost, out reputation is in shreds over this in terms of international concerts ,it’s gone viral in the United States in particular...I feel to a large degree it is a debacle. Something needs to be done to rescue this and rescue it very quickly.”

Mr Mulvey suggested that perhaps all five concerts could go ahead and the GAA as a reciprocal gesture apply for no concerts in 2015.

However Dublin City Council has said the decision made on the licences cannot be reversed.

Meanwhile Taoiseach Enda Kenny hopes the matter could be resolved. Speaking from Berlin yesterday, he said: “Clearly the matter was a planning decision for Dublin City Council. They may be able to work out some consequence to that that will allow the remainder to go ahead but it’s not for me to interfere in any way in that.”

Brooks said in a statement issued late last night: “To choose which shows to do and which shows not to do would be like asking to choose one child over another. However this plays out, Ireland has my heart and always will.”Mr Brooks thanked the people of Ireland for how welcome they had made him feel.

After the council’s decision emerged, other venues offered to host the concerts – Kildare’s Punchestown racecourse, Páirc Uí Chaoimh in Cork and Lissadell House in Sligo.

Earlier yesterday concert promoter Peter Aiken said it was not possible to split the shows between venues. He said Brooks had a specific vision for a five-night spectacular.

Residents living near Croke Park welcomed the council decision but said they would go ahead with a protest outside next Monday’s city council meeting over the granting of licences for any of the concerts.

The nature and scale of the shows planned was such that it would take five shows to “get it right” Mr Aiken said.

He added that their scale also meant that it would not be possible to use another venue for the two concerts which cannot now be held in the Croke Park Stadium. “It’s a one off show ...we can’t strip that down and move to another venue.”

Mr Aiken said he or members of his staff had been in daily contact with the city council and had been given no indication there would be problem with running five concerts.

The council said it was refusing permission for two of the five concerts over fears of noise, traffic disruption, illegal parking and “potential antisocial behaviour”.

The “scale, magnitude and number” of concerts, with an expected attendance of in excess of 80,000 people per night over five consecutive nights, three of them being week nights, was “unprecedented” for Croke Park Stadium, the council said.

It appears unlikely that the cancelled concerts can be relocated to another venue as planning laws require an application to be made ten weeks before an event.

Some 400,000 tickets for the five concerts were snapped up within days when they went on sale earlier this year.

In its decision the council noted that three consecutive concerts have already taken place in Croke Park, the One Direction concerts held in May.

It said Croke Park was situated in a heavily populated residential area and that five shows in a row following the three concerts earlier this year was an “over intensification” of use of the stadium for special events.

“It would be in effect permitting an increase of 100 per cent in terms of the maximum number of concerts that had previously been held in Croke Park in any given year since the redevelopment of the stadium.”