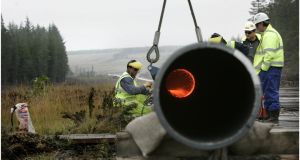 The EPA says it does not believe there are any pollution risks from a pipe from the Corrib gas project has surfaced from the seabed in north Mayo, saying the pipe was transporting “mainly rainwater”. Photographer: Dara Mac Dónaill/The Irish Times

The Environmental Protection Agency (EPA) is investigating how an outfall pipe from the Corrib gas project has surfaced from the seabed in north Mayo.

Recent storms are believed to have caused the damage, which resulted in a stretch of the pipe coming loose and floating up to the surface, where it was spotted by fishermen on Friday morning.

The EPA says it does not believe there are any pollution risks, as the pipe was transporting “mainly rainwater”.

The fishermen had been crossing Broadhaven Bay towards Porturlin when they spotted the pipe on the sea surface, and reported it.

Shell E&P Ireland, which said that it was about 800m long, confirmed that it had mobilised marine support vessels to the location.

Describing it as “plastic ducting”, the company said the pipe was used to treat discharged “treated surface water” from the Ballinaboy terminal, as per its licence from the EPA.

“Once the offshore team has assessed the situation, a remedial plan to reposition the ducting on the seabed will be carried out,” the company said.

“As gas from the Corrib offshore field has not started to flow, no produced water is being discharged to sea,” it said.

The incident is an embarrassment to the company which has emphasised the high standards applied in constructing the Corrib gas project.

Erris fisherman Pat O’Donnell, who was jailed for seven months for offences related to his opposition to the project, said that “this should not have happened”.

“This is what we fought against, and we are so lucky that there were no pollutants in the pipe,” he said.

The outfall or discharge pipe was laid to carry marine emissions from the Corrib gas terminal at Ballinaboy out to sea off Erris Head.

Originally, it was intended to discharge chemical contaminants, but the Erris Inshore Fishermen’s Association campaigned for an alternative due to fears about impact on marine life.

It secured a commitment that contaminants would be pumped back into the wellhead 83 km offshore.

A legal agreement copperfastening this was signed by Shell with the fishermen in 2008, but required a change to its EPA emissions licence.