More than 2,500 gardaí on checkpoints at any one time through May bank holiday to ensure compliance with restrictions 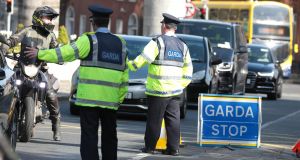 A Garda checkpoint at the entrance to Phoenix Park in Dublin on April 27th. Photograph: Collins

Large numbers of Garda checkpoints on main routes and back roads across the country are to be deployed from today until after the May bank holiday.

The Garda said it was renewing Operation Fanacht – the crackdown on travel – to ensure compliance with Covid - 19 restrictions.

The operation, which was deployed successfully to discourage people from going to holiday homes over Easter, will again see an extensive network of checkpoints established across the State. It will run from 7am on Tuesday until Monday, May 4th.

The Garda said “thousands” of mobile checkpoints are to be deployed on secondary routes and in towns and villages.

At any one time, there is to be more than 2,500 gardaí involved in checkpoints or in high visibility patrolling.

Deputy Commissioner responsible for Policing and Security John Twomey said, it was “vital that high levels of compliance with the restrictions which were noted over Easter were repeated”.

“We need this compliance to continue. This is a critical week for the country. If we all work together, we can help save the lives of our family, friends, neighbours and colleagues,” he said.

Mr Twomey thanked the public for the co-operation “so far”.

Ministers will be briefed at this week’s Cabinet meeting on Tuesday morning not to expect any substantial relaxation of the lockdown measures when they lapse after the forthcoming bank holiday weekend, according to senior Government figures.

Instead, new orders mandating a continuation of the lockdown will be signed this weekend, with the Government likely to make the announcements after a special Cabinet meeting next Friday.

However, Ministers and public health officials are likely to set out a roadmap for the eventual easing of the restrictions, with separate phases – each involving a greater opening-up of economic and social life – taking place throughout the summer, assuming targets for the suppression of the virus are met.

Garda Commissioner Drew Harris has said the majority of people are “very compliant” with the restrictions relating to the public health emergency.

Speaking on RTÉ’s Crimecall programme, Mr Harris said that breaches of regulations where gardaí have to engage in enforcement are “very rare”.

Mr Harris said gardaí were well resourced and in a good position to enforce the travel restrictions in relation to Covid-19.

The policy in tackling breaches of the Government’s stay-at-home regulations is to to engage with those found out walking or driving, to explain the policy and the need for restrictions, to encourage people to go home, and to enforce the emergency legislation only if necessary.