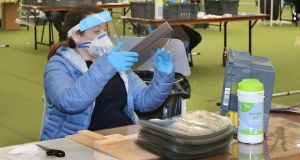 Workers in the Meadowbank Sports Arena in Magherafelt, Co Derry, where Bloc Blinds have set up a factory floor making protective equipment for the health services North and South. Photograph: Margaret McLaughlin

Two weeks ago, Meadowbank Sports Arena in Magherafelt, Co Derry was full of primary school children taking part in a GAA blitz; today, the leisure centre has been turned into a factory making face shields for healthcare workers.

“I feel very privileged that I’m fit to help our doctors and nurses, who are the people on the front line,” says Scott McMullan.

He is one of 120 employees at local firm Bloc Blinds, which until the coronavirus crisis manufactured blinds for windows and skylights. As a a non-essential business, it had been preparing to close, and to furlough its workers.

“We knew it was the right thing to do, to stay at home, but you felt so helpless,” explains McMullan.

“But when we all got the message to say that we were going to make PPE [personal protective equipment] for the healthcare workers, it was just amazing, it gave you a real buzz.

“You knew you were helping in some way, and that gives you a positive when there’s negative all round you at the moment.”

Managing director Cormac Diamond is of the same mind.

“It was never an option,” he says. “It was always that we were going to try and help whatever way we could.”

Overnight, Bloc Blinds went from winding down production to ramping it up. In order to comply with social distancing requirements, Diamond knew they would need more space. He approached Mid Ulster District Council, which runs the arena; they said yes immediately.

“That’s the beauty of local government and local people,” says council chair Martin Kearney. “We can just get on with it.”

Get on with it they did. “We were taking this risk of making these volumes without actually having orders,” says Diamond. “We thought, some of us need this stuff, let’s do it anyway, and if it doesn’t work we’ll stop it, but it’s been the exact opposite.”

The company now supplies to the health services, North and South; all of its visors are manufactured on a not-for-profit basis.

“At the end of it if we find there are surpluses we’ll give it all back to the relevant health services. It’s more about servicing need rather than thinking of it as commercially viable or not,” says Diamond.

Offers of help have come from all quarters. O’Neills sportswear in Co Tyrone has provided raw materials, as has Quinn Packaging in Co Cavan, which manufactured and donated more than 1.6 million tonnes of plastic sheeting.

This is cut using the machinery in Bloc Blinds’ existing factory, then transported to the indoor arena for assembly. Everyone must sanitise their hands and put on disposable gloves and a facemask before they are allowed onto what is now the factory floor.

Inside the arena about 100 tables – one per worker – have been set up in rows; each is the appropriate distance apart. Between them are poles – normally supplied with the company’s blinds – which are used to hook and drag boxes from one table to another, to minimise contact.

A large white tent houses the sterile unit, where the finished visors are cleaned and packed for delivery. Including visors supplied in kit form, the firm aims to dispatch half a million per week. It has gone from temporarily laying staff off to recruiting for more.

There is such a feelgood factor here, such a groundswell of goodwill, that this is happening in our town

Concerns have been raised in the North over the availability of PPE, as well as over how businesses are implementing social distancing regulations. On Tuesday, Bloc Blinds was among the firms singled out for praise by the First Minister, Arlene Foster, at the Executive’s daily press briefing.

“We must not lose sight of businesses who, in the face of this terrible health crisis, have recalibrated their production lines with much-needed PPE,” she said. Bloc Blinds was among the firms which, she said, “we must celebrate”.

Diamond is celebrating his staff. “Every one of them that was of the right profile, in health or age, is here, and that’s an example of how our own staff have bought into it and, beyond that, the community.”

Kearney agrees. “There is such a feelgood factor here, such a groundswell of goodwill, that this is happening in our town.”

“It’s humbling,” says Diamond. “We could have stayed at home. We weren’t ordered or contacted to do this, we weren’t asked. We just did this ourselves.”