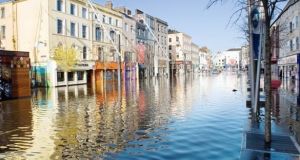 The flooding of November 2009 left the Grand Parade in Cork city centre submerged. Cork residents whose homes were flooded in 2009 have expressed disappointment that the ESB has chosen to appeal a High Court ruling which found it was substantially responsible for the flooding. Photograph: Daragh Mc Sweeney/Provision

Cork residents whose homes were flooded in 2009 have expressed disappointment that the ESB has chosen to appeal a High Court ruling which found it was substantially responsible for the flooding.

The Mardyke Residents Association, which represents many of those whose homes were destroyed in the flood, is to hold a meeting to discuss the ESB decision to appeal the High Court ruling.

Mardyke Residents Association spokesman, Barry Keane said the group was not surprised by the ESB decision given the manner it had fought the High Court case brought by University College Cork.

“True to form, the ESB have decided to appeal the Commercial Court judgement which found they had been negligent in their management of the Lee valley dams in November 2009.

“A full reading of the decision shows how devastatingly the ESB case was dismissed. The victims expect a speedy Supreme Court decision in favour of UCC,” said Mr Keane.

Last Monday, Mr Justice Max Barrett ruled in the High Court that the ESB was 60pc responsible for the flooding on November 19th 2009 which caused €20 million worth of damage to UCC.

UCC, which saw its properties such as the Glucksman Gallery and Western Gateway Building flooded to a depth of several feet of water, brought the action on behalf of its insurers, Aviva.

The ESB had argued that heavy rains had led to flooding upstream in the Lee Valley and it had no option but to increase discharges from its dams at Carrigadrohid and Inniscarra above Cork city.

The unprecedented discharge of 535 cubic metres per second from Inniscarra led to heavy flood down the Lee Valley into the low lying areas on the western side of Cork city.

Flood waters engulfed the Carrigrohane Straight, Western Road, the Mardyke and much of the Marsh and Middle Parish areas all the way down to Washington Street and the Grade Parade.

Responding confirmation of the ESB appeal, Mr Keane said “the ESB routinely measure run-off rates in the Lee Catchment and should have known that this had increased in the days before the flood.”

Mr Keane pointed out that the ESB had admitted during the High Court case “that this was a normal rain storm and not a 1 in 800 year event as they claimed initially.”

“The judge found that if the water behind the dam had been released in the days before the flood then none of Cork’s built up area would have been flooded,” said Mr Keane.

“The judge found that after ESB released their catastrophic flood they failed to adequately warn the city what was coming. This is indisputable and is negligence, according to the judge.”

Mr Keane pointed out the ESB’s own engineers as far back as 1987 were expressing concern about the storage capacity of both the Carrigadrohid and Inniscarra reservoirs in a major flood event.

He said the ESB engineers said that Lee dams had significantly reduced the extent and frequency of flooding along the Lee valley into Cork city through managing and controlling discharges.

But the ESB engineers warned that “because of the relatively small size of the Lee reservoirs, the amount of flood alleviation reduces for the more extreme flood events.”

Mr Keane said that the ESB engineers struck a note of caution, saying “consequently a false sense of security may occur” and this was precisely what happened on November 19th 2009.

“If the ESB can any explain why any of these failures are not negligent we will be impressed,” said Mr Keane on behalf of the group, many of whose members have brought claims against the ESB.