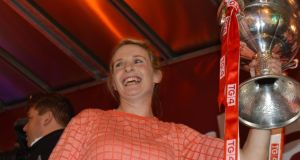 Freddie Mercury may never have played Croke Park but he sure nailed it when it came to identifying the mark of true champions – a never-say-die attitude.

Last night as the crowds gathered on South Mall to welcome home the victorious All-Ireland winning Cork women footballers, a medley of Queen hits belted out from the podium, with Freddie lustily delivering We are The Champions. He might well have been singing about coach Eamon Ryan’s charges after they staged one of the greatest comebacks since Lazarus turned a few heads back in ancient Israel.

Ten points down with 15 minutes to go, the Cork women hauled themselves back into the game, drawing level with the impressive Dublin outfit before finally overtaking them on the home straight to capture their ninth title in 10 years on a 2-13 to 2-12 scoreline.

The crowd went wild when team captain Briege Corkery took the microphone. Loud cheers too for all the players, particularly for goalscoring subs Rhona Ní Bhuachalla and 17-year-old newcomer Eimear Scally, who planted the ball in the back of the Dublin net to make the impossible seem possible.

And loud cheers too for Geraldine O’Flynn, the flying wing back who scored the winning point.

The celebrations on Leeside ended as they always do for Cork homecomings, with the crowd joining in an impressively anthemic version of “De Banks”. Freddie would have been proud.