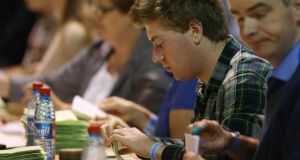 Counting of votes in the referendums on the future of the Seanad and the establishment of a new Court of Appeal is underway at count centres around the country. Photograph: Niall Carson/PA Wire

Cork city and its environs has narrowly voted to accept the proposal to abolish the Seanad with just 88 votes separating both when the votes in both Cork South Central and Cork North Central are combined.

All of the boxes have been opened in Cork North West, Cork South West and Cork East. Tally men indicate that the Yes vote is coming in at 55 per cent to 45 per cent in all three rural constituencies in the county.

Cork South West Labour TD, Michael McCarthy, who campaigned for a no vote said he was “heartened” by the figures coming through both locally and nationally.

“I am happy at the way it has gone. It is a victory for democracy whatever happens overall. People who were out on the ground were picking up on the fact that the no vote was stronger than predicted. The pollsters got it wrong.”